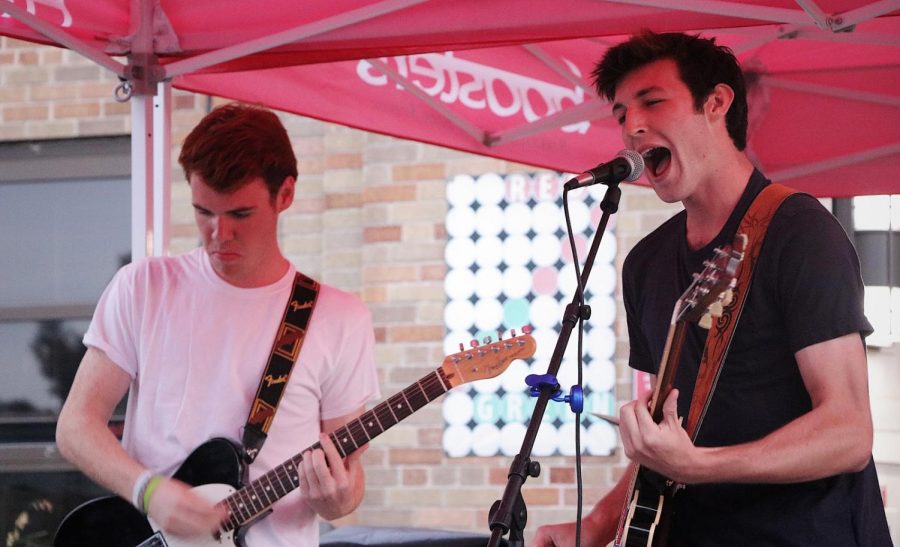 Seniors Tate Renner and Parker Bailey switch between roles as lead singer and guitarist of their band, TheSpins, during their songs.

A cool breeze and a little drizzle didn’t dampen the spirits of the four bands, fans, and spirit of the Jambone Music Festival on the front steps of Hinsdale Central on Wednesday, Sept. 19.

Jambone was established one year ago, intended to honor the memory of Mr. Jim Horan. Mr. Horan was an English teacher, Latin teacher, golf coach, Latin Club sponsor, and Guitar club sponsor who worked at Hinsdale Central for 22 years.

Horan, who passed away on March 18, 2017,  was well-respected and recognized for his character and positive impact on students and co-workers.

Mr. Horan involved himself with teaching guitar and giving opportunities to student guitarists to practice after school.

“He was a great mentor,¨ said Robert Russo, current sponsor of the guitar club. ¨He would always say to embrace the struggle and you are able to achieve goals as long as you’re doing the work and getting things accomplished. He always had fun in trying new things and loved learning from the kids because they were all so very talented.”

Each band had a 30-minute set that allowed them to showcase 8-10 songs of their own written music and also perform popular song covers.

¨The setup was useful and tuning was really good,¨ said Katilin Mrksich sophomore lead singer of the band Straight Flush. ¨There was all of the heavy equipment in the back where we can hear everyone well and know what we sound like .¨

¨It’s the best to perform on stage in front of your peers,” said Colin Ratcliff junior guitarist and singer of Kontrolled Kaos. “When you’re in front you get a different energy like nothing else.¨

Some bands decided to group together recently, preparing a few days prior to the show, while other bands like TheSpins formed around seven months ago, practicing at least three days a week for the shows that they perform at.

¨We always take any opportunity for us to play at HC to share music and touch students’ lives,” said Jonathan Tatooles, senior drummer for TheSpins.

Towards the end of the night, students enjoyed the music that the student bands presented while enjoying food, courtesy of In House Chef on site business.

¨I think [Mr.] Horan would have enjoyed watching those kids rock it out on the stage and would have been excited for them to play in that setting and to just have a really good time,” said Mrs. Alisha McCloud, sponsor of Jambone Music Festival and a close colleague of Horan. ¨I think he would have loved the music too.”