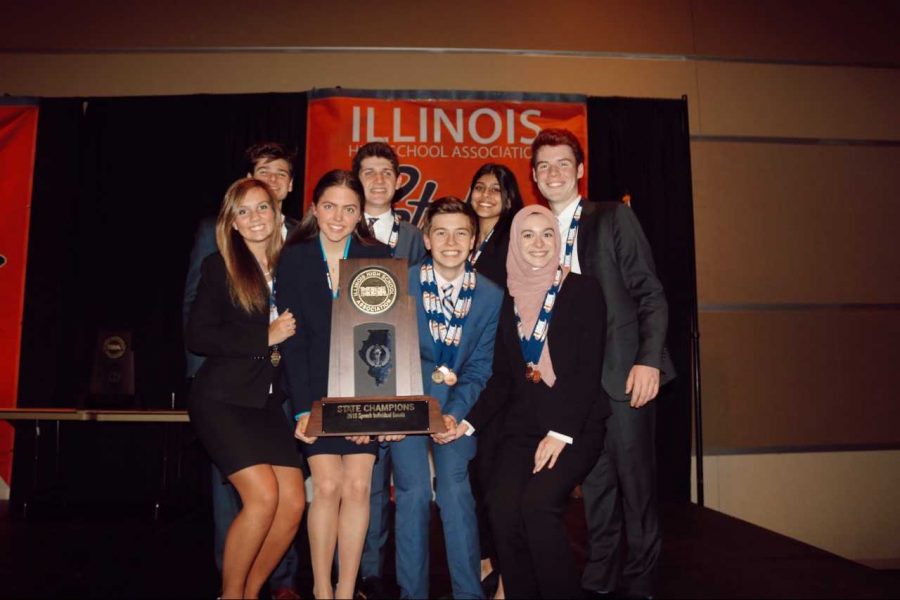 All the seniors on the state team pose for a photo with their state trophy.

The Forensics team won first place at IHSA State, for the second time in the team’s history, on Saturday, Feb. 17 at the Peoria Civic Center. Central finished with 26 points with Thornton High School and Wheaton Warrenville South High School just behind them with 21 points.

Tim Moser, senior, and Tate Renner, senior, won first place in Humorous Duet Acting with their piece “Smokefall”, a skit about two twins in a womb. Mickey Horstman, senior, won third place in Prose Reading for performing “A Very, Very Bad Thing,” a piece that rose awareness for the LGBTQ community. Moser and Emily Goggin, senior, also won third place in dramatic duet acting for “The Choice,” a skit about two parents deciding whether to abort their unborn child diagnosed with down syndrome.

CONGRATULATIONS #IHSASpeech STATE CHAMPIONS! What an amazing group of students and coaches! It’s a great day to be a RED DEVIL! @ThisIsHCHS @RedDevilSpirit @RedDevilsAD pic.twitter.com/W1HIM45RSM

Central also won sectionals a week before at Downers Grove South, as well as regionals which were held at Central on Saturday, Feb. 2. The coaches put together the regionals team based on performances in the regular season as well as their observations during practice. Each school was allowed only one entry for each of the 14 different events, and each entry was given a score from 1 to 6.

“We knew we had a chance to be one of the top teams this weekend,” said Mr. Paul Woods, Forensics coach. “But there are so many things that we can’t control in this activity, so we never focus on the competition or on a result we can’t control. We just encourage the kids to connect with the audience and give their best performance.  If the kids walk out of the room feeling good about themselves, good results often follow.”

Most of the students who attended state were seniors, and only seniors earned points for the team at state.

“I felt like I could have contributed more points, but I am very grateful to have been a part of the state team,” said Charlie Carter, senior Forensics member. “I was seeded second during the prelims but got eighth in finals. Speech is very subjective so it’s hard to understand why you received the score you did sometimes.”

The last time the Central forensics team won state was in 2014, so for the seniors, it was their first, and last, experience being state champions. Most seniors joined the team their freshman year when 120 kids tried out, but only 20 students made it.

“I am going to miss the family aspect of Forensics,” Horstman said. “At one point this weekend, we were sitting on the couch and it was a really bittersweet moment because we have all spent so long together, almost four years, and we have gotten so close. Winning state was like watching the result of all the work we have put in for the past four years.”

All Forensics students that performed at Regionals participated in the showcase for students. There, students could view the performances that the members had been perfecting all season.

Even with the seniors graduating, the coaches said they are confident that the underclassmen on the team will continue to allow success in the future.