Students went Back to the Future at the Variety Show 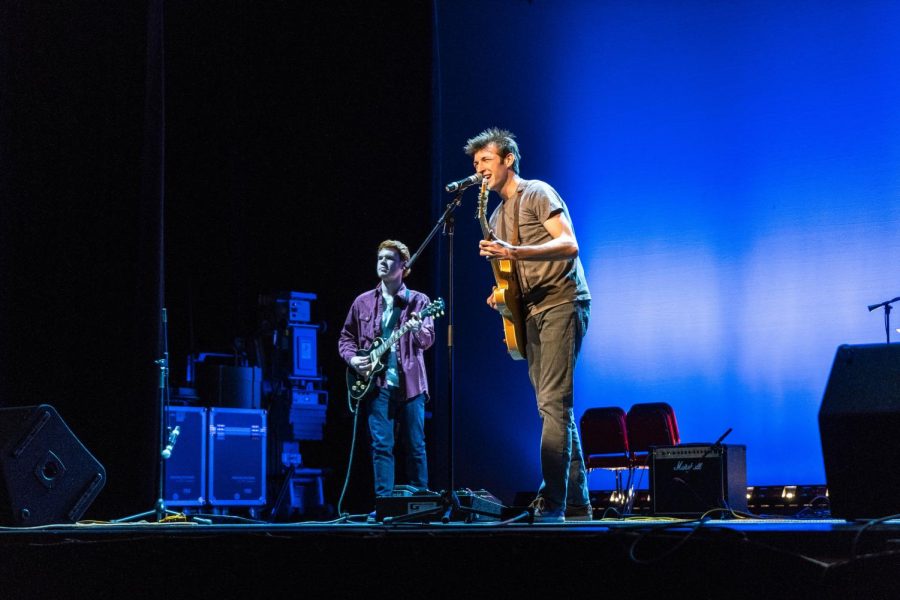 Hinsdale's very own student band, The Spins, performed as the final act of the night.

This year’s annual variety show took place on Wednesday, March 6 and Thursday, March 7. Students from all grade levels showcased their talents which encompassed music, dance, and poetry. The show had 15 acts in total, including: dancing, singing, poetry, and many others. The variety show is a way for students to perform their talents while also raising money for charity, as ticket proceeds went to the Just1Mike Foundation.

“My favorite act was Braden and Kyle because I know them and they surprised me with them playing the guitar and it was nice seeing my friends sing,” said Aliza Daud, senior.

A few of the acts stood out to a lot of students because they’re very unique and the presenters put in extreme effort to get to perform on the nights of the show. The group dance performances and spoken word performance were both very well-received by the audience.

“Spoken word is actually something I’ve never done before, but I felt that it was something a few people outside my religious community were familiar with and I felt capable of delivering a good one, given my background in speech and sort,” said Omar Sheikh, senior and spoken word performer. “I also felt that it would introduce the variety, seeing that many other acts [in the show] were either a song or dance.”

Seniors Ferzam Berki and Nabhan Rafiq were the MCs for this year’s show. Last year, the two decided to run for social chair, however, they ended up getting disqualified because of their hype video. When they saw the opportunity to be a part of the variety show, they saw it as another chance to entertain and hype up the people around them.

“We started preparing from mid-November and originally our deadline was at the end of January, but once it was extended to March, we decided to make some changes and wanted the show to be even better than what we already had in mind,” Rafiq said.

Complementing the MCs between acts and intermissions were their hype videos, produced and edited by Sami Imam, senior. The four-video series highlights the show’s theme, “Back to the Future.” Rafiq, Berki, and Imam began filming for the videos in November and finished just a few days before the show.

“My favorite part of being the MC was just getting to know so many people in the process. At auditions, I got to talk to so many new faces that I might have otherwise never bumped into. During filming, I had the opportunity to meet and film a few scenes with some amazing teachers,” Berki said. “And then at the rehearsals, I got the opportunity to meet with the entire stage crew team for the first time in high school, and they were extremely patient and friendly throughout the whole process.”