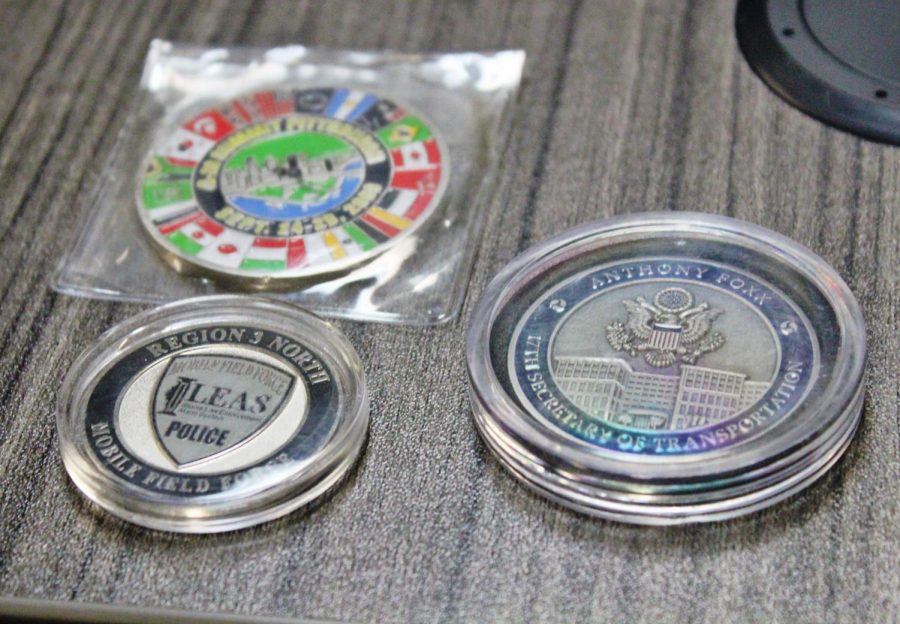 Officer Cooker shares his inspiration for this reward program, modeling the different coins he has earned through his service.

Last week, security at Hinsdale Central and Hinsdale South instituted a new reward system for students: challenge coins. The coin or chip, a red or yellow poker chip with the school’s logo on it, will be given out to students who demonstrate excellent behavior that promotes safety.

Officer Geoff Cooker, security guard and former police officer, came up with the idea. Cooker has seen the coins in use as a reward system during his tenure as a police officer and knows they are often used in the military as well. This inspired him to institute the tradition in District 86.

“We want to earn some good will and camaraderie with the students,” Cooker said. “We are security officers, we are not the police. We want you to understand that you can talk to us and point things out to us, so we can keep you safe.”

“This is a way to earn some trust and respect from you guys,” Cooker said. “We have to earn your respect, this is your school.”

Students will be rewarded for performing any act around the school that they did not need to do but did for the benefit of the school as a whole. The program is not designed to “snitch”, but instead it is about promoting good-will and safety. A student must perform a rare act, something that stands out and the chip will be given to commemorate such an accomplishment.

“Let’s just say a teacher fell and got hurt and you were there and got help from the nurse,” said Officer Mike Coughlin, security officer and former police officer. “I’m not saying save a life, but do something really above and beyond.”

The chips originated within the Roman army, and have been used ever since. Roman soldiers, when returning from battle, were given a coin as a token of appreciation for their service. The coins did have monetary value, but most soldiers kept them for sentimental value. The practice has been in place ever since.

Challenge coins have also been used in neighborhoods where law enforcement is not trusted, in order to bridge the divide between the residents and the police officers.

The goal of challenge coins is to get to the highest level, which would be that of the president. Cooker has received challenge coins during his career, the highest being from a cabinet member, the Secretary of Transportation under President Obama, Anthony Foxx. Cooker received this for working Foxx’s security detail.

The coins are typically given through a handshake, as it signifies appreciation of the recipient’s service.

Security head and former police chief Kevin Simpson said he has high hopes for the program.

“There has already been feedback from students that’s very favorable,” Simpson said. “I’m sure some people won’t fully understand it, but I hope they will. I’ve seen a positive influence already, so it’s encouraging.”

Only the eight members of the security team at Central and the eight at South will give out the challenge coins, and Simpson believes they will be able to form a bond with the student body.

“I went out of my way to hire the right people, and I put a premium on an ability to communicate and get along with high school students,” Simpson said.

Looking forward, any positive or deeply impactful act done by a student will be rewarded by a challenge coin by the security officers.