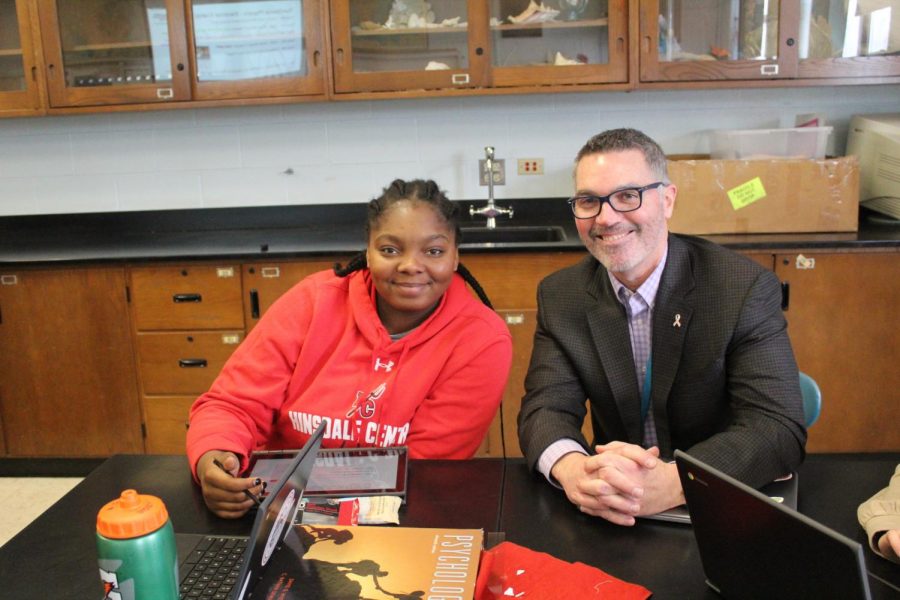 Principal Walsh and senior Maiwen Amegadjie shadowed each other throughout the day on Monday, Jan. 27. Walsh got to engage with other students in Amegadjie's physics course.

On Monday, Jan. 27, Principal William Walsh switched places with senior Maiwen Amegadjie. Amegadjie was the winner of a popcorn selling competition through Student Council which allowed her to spend the day with Principal Walsh.

The two attended a facilities meeting during the first three periods of the day, Maiwen’s classes during the lunch periods, followed by a department chair meeting for the last two periods.

Walsh went with Amegadije to her AP Calculus class and Physics Traditional class. Walsh said he found both classes difficult, but especially physics. He considers himself a “math guy”, so calculus was not very difficult, but he didn’t have the background knowledge necessary for a physics class.

Amegadije usually eats lunch in the activities office with Ms. Philip, but she instead ate a quick lunch with Walsh in his office.

While shadowing Walsh, Amegadije got an inside look at the operations of the district, while Principal Walsh was able to engage in the daily life of a student at Central.

Walsh reported that he was surprised that Maiwen didn’t have a traditional lunch, and how busy her day.

“Maiwen is a varsity basketball player and is [in] multiple AP classes, so I can see how a student’s day is consumed with schoolwork,” Walsh said. “I have to continue to look at how we are meeting the needs of students so they can get that designated break during the day.”

Before becoming assistant principal and eventually principal at Central, Walsh worked as a business education and accounting teacher. He said that the experience made him nostalgic.

“The best job in the world is being a teacher,” Walsh said. “Getting back in the classroom in any capacity, in this case as a student, is fun.”

Walsh noted that the high school experience nowadays is different from when he was a student. He found it to be a more collaborative experience, and more focused on understanding rather than memorization. He noted that today’s classrooms are a more healthy environment.

Junior Abby Antinossi shares a table with Amegadije during physics and got to collaborate with Walsh during class.

“It was so fun,” Antinossi said. “I really enjoyed having a fresh perspective on the material, and Mr. Walsh worked really well with our table.”

Amegadije said she was surprised by the amount of work the administration does on a daily basis.

“It takes a lot to run a school and our school is an especially collaborative effort,” Amegadije said. “There are lots of committees dedicated to the smallest aspects of building a strong school environment.”

She also noted that she gained a newfound respect for the administration and all that goes into running a school district.

Student Council has no definitive plans to repeat the contest, but it may return in 2021.