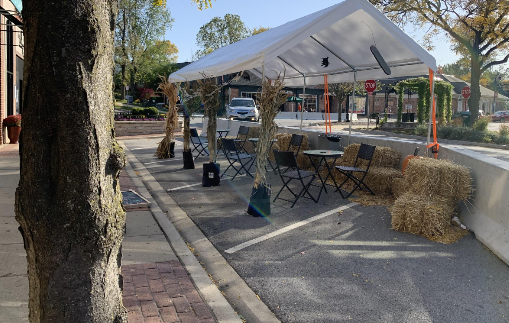 Since March, Clarendon Hills (above) has provided options for outdoor eating in response to the global pandemic.

From the months between March and October of 2020, restaurants within the Clarendon Hills area have found that the amount of business they received has changed rapidly throughout the quarantine. This has largely been a result of public opinion and fear.

Initially, many local restaurants found themselves struggling, forced to shut down as a result of the announced quarantine. Daily restaurant business was down 54 percent when the quarantine went into effect. This could also be due to the fact that, as people were preparing for the pandemic, they started to focus their spending more on groceries.

“People decided that they really had no choice. They were cooking meals,” said Kerri McClimen, the overseer of food brand communication for Perdue Premium Branch, a meat delivery company. “When COVID hit, restaurants were hit so severely. They couldn’t open…[on] the other side, retail went crazy. They needed so much more [supplies].”

Many people started to turn more to home cooking. Throughout the early weeks of quarantine, many families were strictly eating food at home, afraid or unable to order from restaurants.
“In the beginning, I did a lot more home cooking,” said Karen Dynis, a resident of Clarendon Hills and a mother of three boys. “Then I got sick of it.”
However, many people, after weeks of home cooking, turned to ordering. Restaurants began to reopen, and they started to accommodate health guidelines and made outdoor seating available. In restaurants that didn’t have patios, they were forced to think outside the box, using streets to set up outdoor seats for consumers. As a result, the public began to order from and eat at restaurants much more frequently, in order to support local businesses.
“In the beginning, my mom was really hesitant to order from restaurants. However, during the summer, we ended up ordering takeout quite a bit,” said Mae Hamilton, a teenager and another resident of Clarendon Hills. “We prefer to order from local businesses, just to support them.”
This represents a trend, as many people opened up to the idea of takeout as the quarantine lengthened. Local restaurants began to advertise outdoor seating, and began to have their workers wear masks. Many restaurants that didn’t initially do takeout focused their efforts on becoming more takeout-oriented. However, restaurants are still struggling.
“Twenty-five percent capacity is nothing,” McClimen said. “Many restaurants have gone out of business.”
As the pandemic furthers and people become less frightened, it is quite likely that businesses will continue to adjust their methods of serving the public. Two new restaurants are set to open in Clarendon Hills in the future. With all that’s going on, it can definitely be expected that they will have takeout options available for consumers.
Delete Image
Align Left
Align Center
Align Right
Align Left
Align Center
Delete Heading