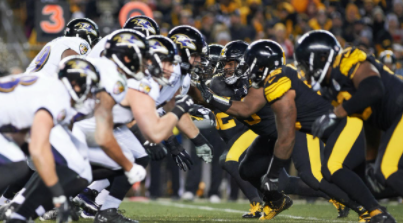 The Pittsburgh Steelers beat the Baltimore Ravens 19-14 on Wednesday, Dec. 2, after postponing the game three times.

For many Americans, Thanksgiving is not complete without watching the National Football League (NFL) games on the television. This year, lots of fans were disappointed when the Pittsburgh Steelers versus Baltimore Ravens game, which was intended to be played on Thanksgiving, was postponed due to COVID-19.

“I was excited to watch the game on Thanksgiving because every time these two teams play each other it’s always a great matchup,” said Owen Jansen, senior football player. “You have two great quarterbacks that can read the field so well, and both teams in my opinion are huge playoff contenders.”

Many fans and members of the NFL were outraged by the unkempt schedule of this game, specifically the Steelers community.

“First the NFL takes away our bye week because another team can’t get their Covid situation together, now they take away our Thanksgiving primetime game for the same reason, Smh [shaking my head],” said JuJu Smith Schuster, wide receiver for the Steelers.

According to CBS Sports, the Ravens are now under investigation by the NFL and the National Football League Players Association (NFLPA) after failing to abide by the COVID protocols. The Ravens have

suspended their strength and conditioning coach, Steve Saunders, who was reported going to work while ill and disregarding face mask protocols. Several Ravens players have expressed concern for other staff members that have also not been compliant with face masks or social distancing guidelines.

Baltimore is not the only team in the NFL reported to dismiss COVID-19 safety guidelines, the Tennessee Titans have recently been fined $350,000 for a similar outbreak. It comes to question whether or not there should be stricter punishments for NFL members and teams who are not following protocol.

“The game shouldn’t have been postponed, the Raven players’ who tested positive should have quarantined and not been able to play,” said Aiden Schackhart, junior.

The remaining season of the NFL this year will  continue to be unpredictable as more members are reported disobey safety protocols.