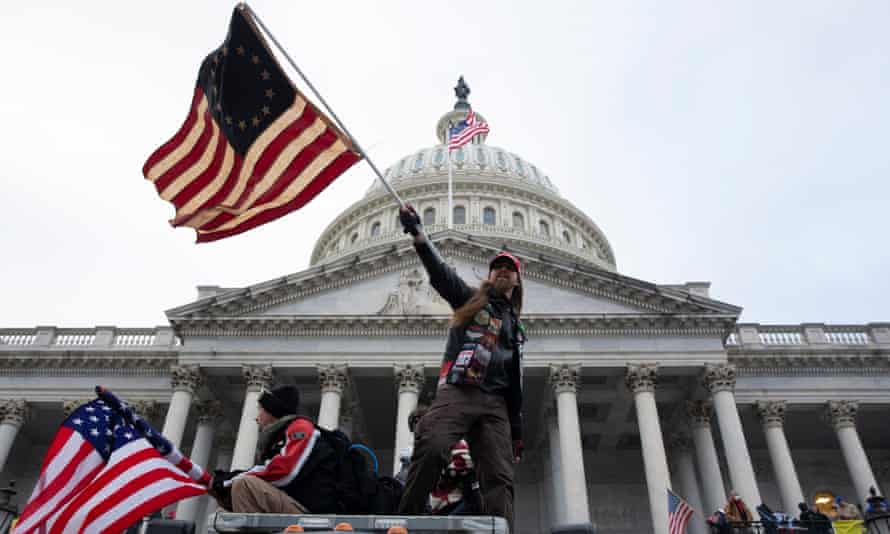 Courtesy of The Guardian

Trump supporters storm the grounds of the US Capitol on Jan. 6.

On Wednesday, Jan. 6, a violent mob of supporters of President Donald Trump stormed the Capitol in an attempt to overturn his defeat in the 2020 presidential election. What some are calling Trump’s failed coup attempt led to the deaths of five people, authorities said.

The attack began around 1 p.m. when Congress assembled to certify former Vice President Joe Biden’s electoral victory. Around that time, President Trump called on his supporters during a speech outside the White House to head to the Capitol and protest the certification.

His supporters followed his command, posting on Gab and Parler “directions on which streets to take to avoid the police and which tools to bring to help pry open doors,” according to The New York Times.

On the western expose of the Capitol, a mob of thousands of Trump supporters crashed through metal barriers where they quickly overwhelmed Capitol police.

“The Capitol police were unprepared for the sheer size of the protest,” said David Gomez, a retired FBI executive.

The mob invaded the floor of the Senate and advanced to break into the House chamber, held back by a barricaded door and armed guards.

By 5 p.m., law enforcement reinforced the overwhelmed Capitol police and began to gradually retake grounds and by midnight, arrests reached into the dozens.

Pipe bombs were found at the headquarters of the Republican and Democratic parties, according to the Washington Post.

The chaos on Capitol Hill extended to the White House. Pence approved the order to deploy D.C. National Guard.

Trump was silent during the first hour of the attack, then he issued a pair of tweets calling on the violent mob to be peaceful.

Amaryah Chandler, senior, said she believes that Trump should be held accountable for inciting violence.

“I one hundred percent believe that Trump should be held accountable for his voter group because no other voter group in the past has ever gone so wildly off the rails for their chosen candidate,” Chandler said. “The presidency, our government is an entity that is supposed to protect us from others but now I have lost much faith in the same government that I had once been proud of even in the face of adversity and hardship. Rome may not have been built in a day, but it fell in one, and while we’re not Rome, it feels like we’re following in their footsteps because of Donald Trump.”

More than three hours after the rioters stormed the Capitol, Trump released a video statement in which he called on the mob to go home. He said he loved them and repeated his accusation that the election had been fraudulent.

More than a week later, the House has impeached Trump for the second time, making him the first president to be impeached twice.

The display of insurrection was the first time the U.S. Capitol had been swarmed since the British invaded and set ablaze the building in August  1814, during the War of 1812.

Mikhail Essa, senior, said he believes that it was quite shocking to see what he initially expected to be a peaceful protest to the results of the 2020 elections transform into a violent mob.

“As disheartening as it was to see several conservative protests misrepresent conservative values and the reputation of those who tend to lean right politically, I believe the events which unfolded are a glimpse into the intensifying polarization plaguing Modern-day America,” Essa said. “This growing divisiveness has resulted from the distance between both sides who are basing their perceptions of each other off of generalizations and stereotypes rather than off of real-world interactions with one another.”

Essa encouraged civil discourse and conversation in order to bridge these divides.

Read more on the impeachment here.