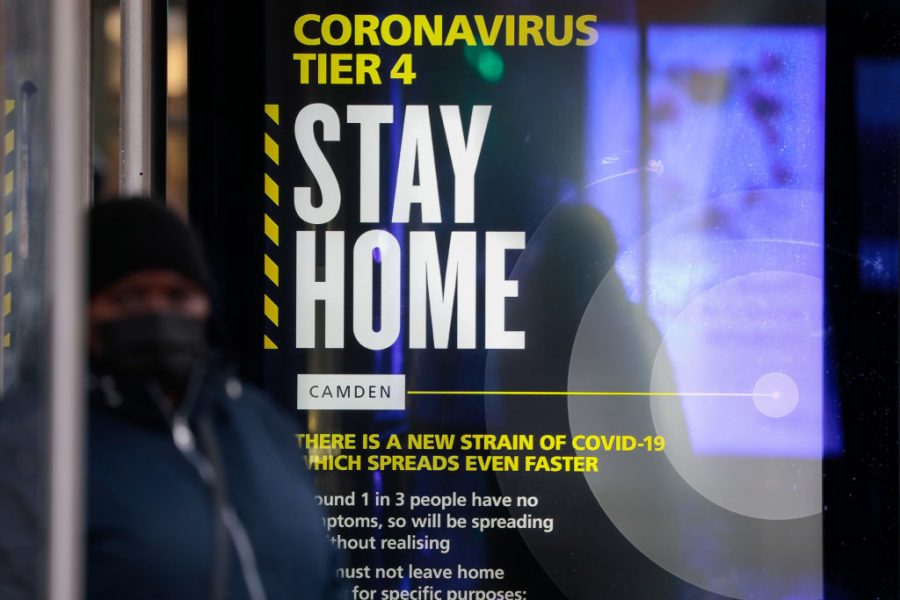 A poster in King's Cross railway station in London, England from December 2020 warns residents to stay at home due to Tier Four regulations.

Due to this more infectious strain, many areas within the U.S. that have low reports of COVID-19 cases may experience another outbreak. A new outbreak could lead to reversing progress in reopening restaurants, sports programs, and colleges.

The University of Michigan has paused all sports until Sunday, Feb. 7 because several students have contracted the new strain.

According to the Centers for Disease Control and Prevention (CDC), it is possible that the strain has been in the United States before the first recorded case on Tuesday, December 29, 2020 in Colorado because there was no issued travel ban into the U.S. from the United Kingdom, the strain’s place of origin.

The new strain is a result of a mutation of the SARS-CoV-2 virus. So far, the only difference between the two viruses is that the new strain is much more infectious. Scientists have said they do not believe that it’s more likely to cause severe disease or death than before.

“All viruses mutate over time, some more than others. For example, flu viruses change often, which is why doctors recommend that you get a flu shot every year,” said Dr. Robert Bollinger, a professor of infectious diseases and expert on SARS-CoV-2, the virus that causes COVID-19.

In Illinois, as a result of the new strain, Governor J.B. Pritzker has decided to move onto phase 1B of the COVID-19 vaccination program, allowing for those above the age of 65 to be vaccinated starting Monday, Jan. 25.

It’s possible that many states will reverse progress in the mitigation phases, due to the rising cases caused by the new strain of COVID-19.

“It’s really annoying that there are more strains of COVID, I thought it was just coming to an end,” said JT Black, junior.

Although this is the most common mutation of the virus, there are still many other mutations around the world that just have not become as prevalent. One mutation found in Brazil could affect those who have been vaccinated and have already recovered from the virus.

The Brazilian strain is similar to the one originating in the UK, as it is more transmissible, and has also been reported in the United States in Minnesota as of Mon. Jan. 25, due to a traveler returning home from Brazil.

Another strain, originating in South Africa, is also a lot more infectious and resists antibodies, it is yet to be found in the United States, however, there are reported cases in Canada, France, Germany, and China.

“I think we should continue to follow precautions that we’ve already taken such as wearing masks, socially distancing, and capacity limits because now we know what it looks like to have the world on lockdown…we can characterize the virus a lot better than before,” said Caitlin Barrett, junior.

In order to protect yourself from these mutations, it’s important to wear a mask, reduce travel, and socially distance.

If you want to find out more information about the new COVID-19 variant you can look for information on the CDC’s website.