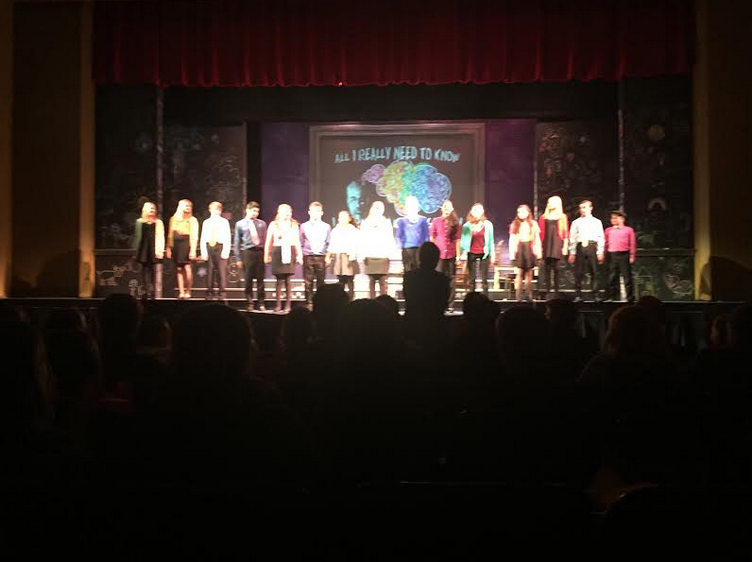 The cast of the freshmen play stand during applause.

I went to the freshmen play, “Everything I Need to Know, I Learned in Kindergarten”, on Saturday night, the last show of three. Because of this, my expectations were that they had performed twice already in front of an audience and that stage fright and thus mistakes would be minimal. I was not disappointed. The enthusiasm and animation of the actors was apparent. They spoke loudly and clearly the whole time, with very few errors in lines or staging.

What surprised me the most was the deeper meaning throughout the whole play. It was a series of little stories told in a narrative format to the audience, ranging from well-known Cinderella with a twist, to a wedding scenario, to a doctor’s office waiting room. The idea was that everything we need to know, we learned in kindergarten (thus the name). Something that I definitely noticed and that is very relatable was the idea that in kindergarten, everyone believes they can do everything: we all draw, sing, play an instrument, act in plays, and many other things. But asked again if we can do any of those hobbies in high school, the answer is usually no, or a yes, but I’m not very good. This was a really cool idea to start the play with, but I noticed that some of the life lessons they touched on were things middle aged people learned, or elderly people, or high school aged people – not always kindergarten lessons.

I loved the life lessons. One was about the Itsy Bitsy Spider and how even though people scream and hate spiders, the song about the itsy bitsy spider going up the water spout is really inspiring. (Side note: the screaming at the spider in this story was a bit excessive and painful.)

Another lesson was “making a living and having a life are not the same thing”. I’m not sure how much I agree with this one, but it is something interesting to ponder nonetheless.

One of my favorite lessons was the story of a gravestone that was actually a bench in the graveyard, therefore showing that someone went through a lot of trouble to be useful after death. This was actually one of two graveyard stories and one of many death topic stories, showing the depth of the play.

The play jumped from story to story and varied from one cast member to all of them. Most ended with a meaningful moral, and all had jokes. The parents were laughing nonstop, and I even giggled a few times. Surprisingly, there were some inappropriate jokes for freshmen.  But it was all done in good taste and not excessively at all.

The director originally saw the play as a musical, so I do wonder what that would have been like, but of course it is the freshmen play, not the freshmen musical.