Streetchat: why LT out “chats” us 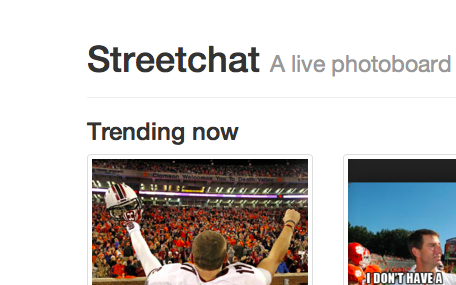 Streetchat is a live photo board that is geo-tagged to a certain school. It is unmonitored, but the app creators say no explicit images or profanity are allowed to be posted. It is anonymous to post and comment other than an assigned username. Users post photos or in-app generated memes to the community, and they are viewed by all. If the viewer likes a specific image they “up vote” it or “down vote” if the user dislikes it.

Streetchat ranks users and entire schools based on their activity and number of upvotes. Lyons Township is currently the most active school in the nation using this app. Competing with Gadsden City High School in Alabama and Strongsville High School in Ohio, LT has stayed atop the leaderboards for over a month now, and the popularity of the app is still strong.

Central, on the other hand, has almost no presence on the app. Days go by without a single post from anyone from our school, and no post has occurred within the past five days. Students at Central report only going on the app to view LT’s community (which can be accessed because it is in the national leaderboard).

Which begs the question: why is Streetchat not a fad at Central? One would assume that Central students are willing to compete against their cross town rivals in almost anything, whether it be sports or social media activity, but it is simply not the case, and there is research to explore why this is.

In a report entitled “The Collective Behavior of Fads: The Characteristics, Effects and Career of Streaking,” anthropologists Aguirre, Quarantelli, and Mendoza defined a fad to be characterized by its novelty, how odd it is, and how thoroughly it spreads through the community. More recently, Margo Bergman, scientist at the University of Houston, concluded fads develop suddenly, they rapidly spread, and they are quickly adopted. The studies concluded that all of these characteristics are necessary for an app such as Streetchat to develop at Central. Because none of these things have occurred the fad and our Streetchat community have not developed.

The structure is very similar to the geo-specific message board app, Yik Yak, which previously became extremely popular at Central in late May and June, as it did for many schools around the nation. The popularity and use of Yik Yak has declined significantly due to bullying and the end of the school year.

Studies also have shown that Central’s previous involvement with Yik Yak has discouraged our participation in Streetchat. Jonah Berger from the University of Pennsylvania, Gaël Le Mens from Stanford University, and Pompeu Fabra from University in Barcelona studied why fads develop and die. They concluded the idea or product must be truly novel to become a fad. Because of the similar structure to Yik Yak, students immediately associate Streetchat to an app dying in popularity, thus discouraging them to participate in the potential fad.

For those wondering if Central’s Streetchat participation will come around, it is unlikely to say the least.