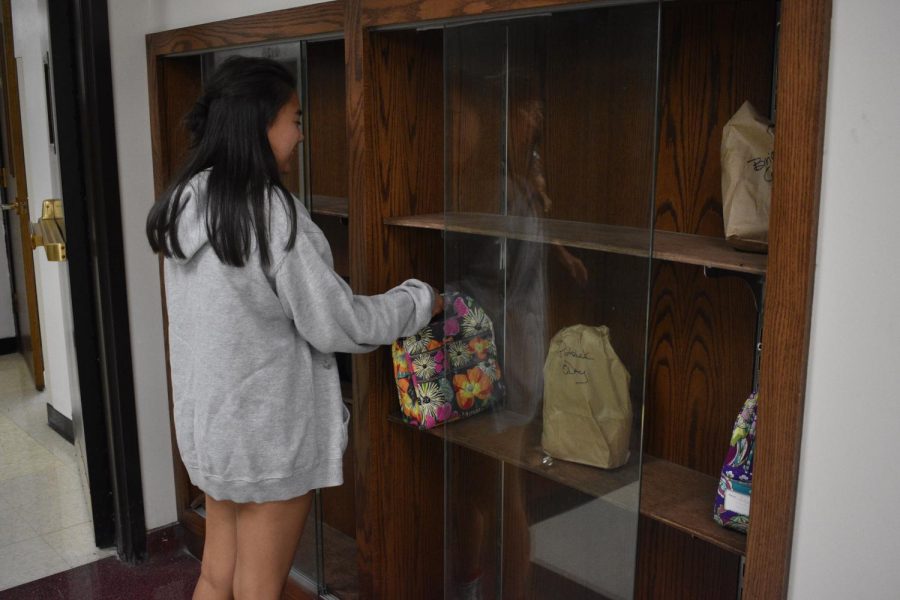 Now when parents drop off lunches, they go on the shelf outside the bookstore, so kids can pick their lunches up during lunch periods.

This year, a habit has been formed by seemingly every Central student: forgetting to bring a lunch to school. The school had no choice but to change the entire system for when parents come to drop off packed lunches.

Before the change, parents came to the student check-in area and dropped the lunches there, and their children would come before lunch to get it. So many people would do this every day that the line would often block the traffic in the hallway with all the people waiting to pick up their food. The system had to be changed as it became a safety issue in the school, and whoever was working at the check-in gained the new position of “Lunch Coordinator.” As well as organizing boxed lunches, the person at the check-in had to oversee food delivery transactions, which is no longer allowed.

Entering high school, we must accept our new independence, and forcing our parents to take care of our own responsibilities is quite immature. It’s pretty easy to remember to take a lunch to school, and it should be a task that can be handled by your average teen. If you have a day where you forget it, you should be able to accept the consequences of being forgetful.

“The change in procedures is to ensure safety & security at the greeter and lobby,” said Mrs. Dever, Director of Deans, “The past practice was distracting to staff and was taking them away from their primary responsibility of safety & security.”

Mrs. Hall, who works behind the greeter’s desk throughout most of the day, many times greeted parents and students for their missed lunches, but was not a part of the policy change.

Most students are unaffected by the change at the school. They have a routine in which they bring a lunch every day or buy one.

A part of the new system that has many students unhappy is the policy that students may no longer get food delivered during school hours. Students would often order pizzas for their lunch period or for a specific class period, but it is no longer allowed.

“You could place an order for a certain time… and you would go to the front entrance and pick it up,” said Nick Baar, junior.

Parents coming to school to drop off lunches became such a prominent issue that there would, at times, be a line going outside the building. With the new system, parents have to enter the building to drop off the lunches and put them on the shelf outside the check-in. Since the change, it has become less of an issue because the process for the parent becomes more difficult, as they now need to get passes to enter the building.

The new changes will hopefully help the students gain some responsibility for their actions and not rely on their parents. Students should have the accountability to take care of their school lunch, and if they forget it, they should buy a lunch or go without eating.