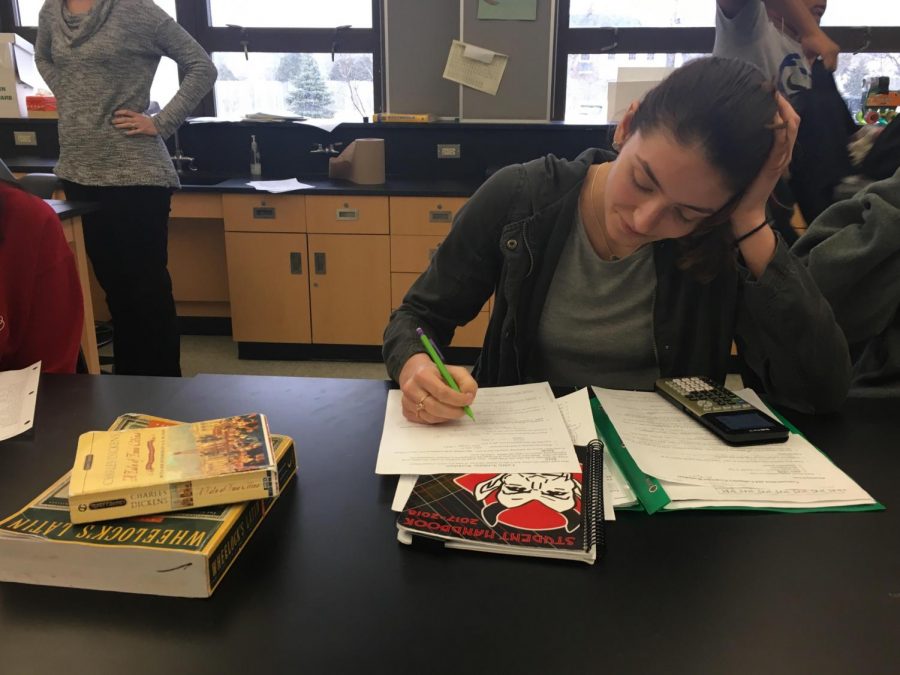 Mia Gaddis, sophomore, works through a worksheet of chemistry problems during class.

Third quarter ended last Friday, March 16, which came as a relief to many students, including myself. Personally, I couldn’t be happier to be moving into fourth quarter. In my opinion, third quarter consistently stands alone as the worst few months of the school year.

To begin, third quarter is the longest quarter of the year, lasting 48 days. Within third quarter, we have only three days off, one of which was taken away due to a snow day earlier this year (Sure it was replaced by the snow day itself, but we all know it’s not the same as a having a day off.) In addition to a limited number of days off, third quarter does not include any extended holidays or breaks compared to second quarter, which includes Thanksgiving Break and concludes with Winter Break, and fourth quarter, which begins with Spring Break starting next week.

I think part of the reason third quarter is such a struggle for many students is because of the general winter season. Chicago winters hit their peak during January, February, and March, and prior to the Daylight Saving Time change, days can feel extremely long, dark, and miserable.

“It’s always super cold during third quarter, and the days are so short. I feel like it’s dark out when I get up to go to school and it’s basically getting dark again when I get home,” said Shalini Sahgal, junior. “For a lot of students, there’s just no motivation to do anything.”

Even though there’s little motivation during third quarter, it’s hard to slack off this time of year, which brings me to my next point. For me, third quarter is the most stressful quarter of the year in terms of course-load. In first quarter, students are coming off of summer break and just getting into the swing of things. In second quarter, work begins to pick up, but nothing gets too heavy before winter break. By the time fourth quarter rolls around, many classes have already begun to review for AP exams, and are simply working on cumulative assignments. But during third quarter, the perfect storm is created: very few days off, depressing weather, and high expectations.

For me, third quarter also feels especially lengthy after coming back from a long winter break. For many of my peers, I know that the day third quarter begins is also the day the countdown to summer begins.

“I also think third quarter is tough because everyone is pretty sick of school by then,” Sahgal said. “We’re all just waiting for fourth quarter because that means summer is close and school’s almost out.”

Don’t get me wrong, I’m by no means saying that the other three quarters are easy, or that third quarter will be the death of us all. All I’m saying is I’m very relieved to be moving on to the last quarter before summer.