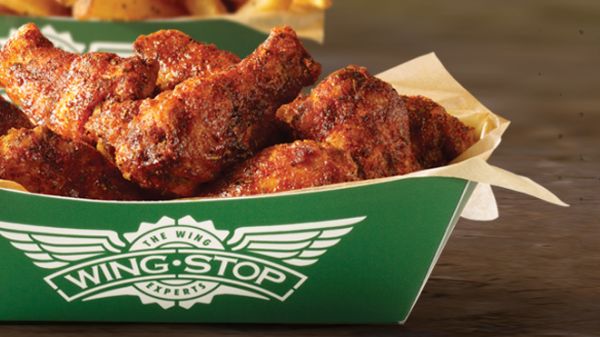 For comparison, 10 boneless wings at Wing Stop is $6 while six wings cost $6 in the cafeteria.

Wing toss is one of the most popular lunch items, with the line oftentimes stretching out the door. It is offered on Thursdays and costs $5.95 for a single scoop of six wings, and $9.95 for a double order of 12. Students are also given tater tots and soup with their order.

Although they’re popular, its price is a drawback for students. For comparison, a large-sized wrap with chips costs $4.25.  The full menu can be found here.

“I feel like I can go get better quality wings for the same or lower price. Although I really like wing toss, I wish it was cheaper,” said Kareem Touleimat, senior. “I pay $10 for my lunch on Thursdays, every other day my lunch is under $5.”

Touleimat, along with many students, gets a double order, totaling his order to $10.

“I get at least a double order, sometimes a triple order. I also don’t eat the tater tots, so it’s pretty much $10 for just wings,” said Cole Harris, junior.

Quest, the business that handles school lunches, is aware of student concerns.

“We’re bringing you the best quality of a nugget we can get, and we try to make it at the lowest price,” said Vannessa Leon, Quest employee. “At Buffalo Wild Wings, for example, seven wings will cost $7, and that is just wings, we offer soup and tater tots.”

Quest says they are always open to making changes to wing toss. They recently changed the plate the wings are on too a bowl, as it would be easier for students to carry.  They have thought about offering just the wings for a lower price, and have also thought about serving waffle fries as a side instead of tater tots.

“We would be able to offer bone-in wings for a lower price, but students prefer boneless wings,” said Kristin Kasprzak, Quest manager.

Taking the amount of food into consideration, wing toss is a fair price. Some students feel otherwise though, and Quest will be addressing those students concerns. Changes to wing toss may be possible in the future.