The real issue behind Covington Students and Nathan Phillips 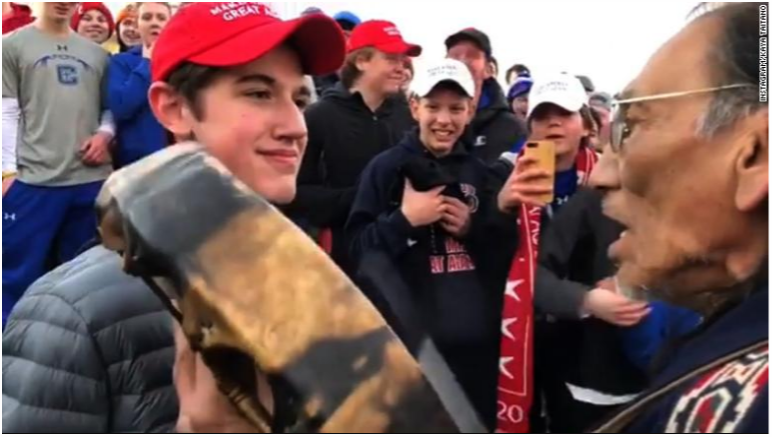 An incident between Nick Sandman and Nathan Phillips become viral with public outrage fueling the story.

An incident vividly captured by photos between Covington Catholic High School students and American Indians activists– specifically between Nick Sandman, a Covington Catholic junior, and Nathan Phillips, an elder with the Omaha tribe– quickly became viral on social media. The confrontation occurred on Saturday, Jan. 19 and caused outrage and indignation against the teenagers and mainly Sandman.

When I first heard about this story last week I was very curious about it. People had already labeled the teenagers as disrespectful and racist, social media was in a hailstorm of outrage, and people were already talking about it in the school halls. The now infamous photo of Phillips and Sandman standing face to face was strewn across the Internet, with people making snap judgments based just on seeing the photo. For the first time in my life, I actively avoided reading about this story, knowing that I would want to cover it later on. I knew I had to come into it with a blank slate. I wanted to come into the heated debate with facts or at least the whole story before forming my opinion.

“[News organizations] try to report right away and the culture of 24/7 news cycles means they sometimes add too much analysis and opinion rather than fact,” said Hrishi Deshmukh, senior.

Lo and behold my intuition to wait was right. The first video that caused viral outrage was a couple of minutes long and seemed to prove the first stories right. The initial stories condemned these teenagers for belittling and mocking Phillips and his fellow activists. The blame was immediately put on Sandman. The media spun a tale portraying these teenagers as racist, pro-Trump supporters intimidating a Native American, Vietnam War veteran.

There are so many issues with the way the story was written in the press. Obviously, some of the kids are pro-Trump supporters, but the public has no idea if they are racist. We can’t call people racist just because they support Trump, that is unfair. Reports then wrote that the students were yelling things like “build the wall”. However other videos proved otherwise, with no evidence of this happening. As a couple of days passed more videos were coming out about the actual context of the first video.

In actuality, four Black Hebrew Israelites were yelling slurs and other offensive things at the students. Tension was building between the two sides, and then Phillips and his group entered the fray. I think he came between the groups to calm everyone down, but for reasons unknown, he later approached Sandman.

“In regards to people jumping to conclusions, it’s always ‘Them Vs. Us’ as well as a general bias. Unless [people] have all the facts possible from all different sources, it’s hard to know what’s right and what’s wrong,” said Charlie Otto, senior.

I can’t honestly say who is at fault and I don’t think it is on one person. When looking at the infamous photo of the incident it is easy to understand why it blew up as it did. Sandman is looking at Phillips with a seemingly smug smirk while Phillips looks relatively innocent.

But it is unclear what motive Phillips had when he approached the teenagers. However, that’s not to say the teenagers weren’t at fault. In some videos of the incident, students are seen doing the “Tomahawk Chop” which many Native American Tribes have found incredibly offensive and have called for it to be stopped.

I do think some of the students were being rude and disrespectful to Phillips and other activists. Whether Sandman is one of them is unclear, maybe he was actually nervous like he said in T.V. interviews later. Or maybe he was looking down on Phillips and was being belligerent. I’m not defending Sandman’s actions because I am not a behavior analyst who can find meaning in every expression he makes, and I don’t think we will ever find out who was right or wrong.

But, one thing was made clear from this hysteria: People jumped to conclusions. It’s the honest truth, and it happens more often than we would like to admit. People saw an image on Twitter and already made up in their minds who was the villain and who the hero.

“Any incident such as this involving children should be handled with care because a negative story can ruin a person’s life forever, regardless of the validity of the report,” said Matthew Halpin, junior.

No one thought to find the context of the image, no one bothered to take a step back and to think about what was actually going on. That is the biggest issue. Our society right now is brimming with tension and people are always looking for someone to blame. People are so anxious to find a martyr for their cause, to find a victim and a perpetrator, but no one ever stops to consider what was actually going on.

Internet junkies scour the Internet for any piece of “news” eagerly waiting for anything controversial to put their unnecessary opinions on. I think while some news is acceptable to get from social media, people cannot rely on it or else we will continue to get incidents like the Sandman and Phillips one.

“I do not trust news from social media as a result of the little if any barrier to entry and lack of repercussions of falsified,”  Halpin said.

News networks picked the story up immediately because it was trending and they didn’t even think to get the full facts of the story. Everyone was so excited to write their opinions on a Facebook post or to report it because everyone had labeled it an easy story. It was obvious who was at fault they justified. But then as days went on, as more videos came out explaining the situation, people had to rescind their posts, update their reports because they got it wrong. That’s fine, people can make mistakes, but we the people need to take a second before writing that next post, or writing that article and wait for all the facts.

“I don’t believe that there is anything to be done [to prevent people from reporting the wrong facts]. Large media outlets are some of the only reliable sources left and that is only as a result of the potential backlash following misrepresentation of facts,” Halpin said. “However, with larger and larger partisan divide in the country, I feel as if both sides of the political spectrum have simply circumvented this problem by only broadcasting favorable information to their own political agenda.”

The moral of the story is that we, whether the media or news consumers, should not jump to conclusions as we did with the Covington Students and Nathan Phillips. We have to be diligent and fair to people by giving everyone the benefit of the doubt until the full story is told.