Should the HC goose be relocated? 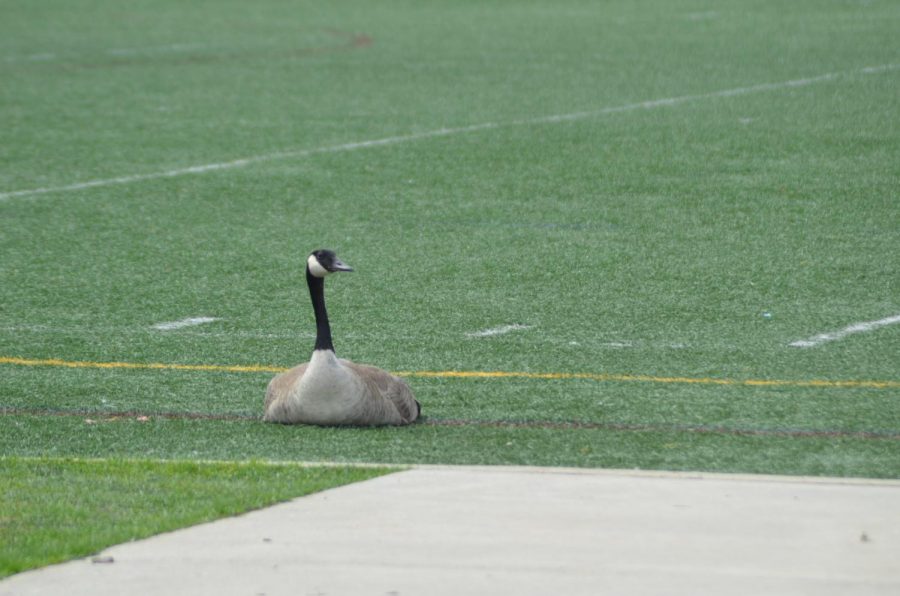 Geese are often seen parading around the athletic fields, courtyard, and parking lot chasing students if they get too close.

Imagine if you were walking from soccer practice on Tower field only to be approached by the Hinsdale Central goose. OK, you can deal with this you think, so you try to walk around this bird only for it to start approaching you. The goose starts flapping its wings and then a horrible hissing sound comes out of its duck-billed mouth. It starts running towards you, its menacing wings whooshing through the air and you start yelling for help but no one is around.

This is a brief description of when I got attacked by that foul waterfowl, and while it is a funny story to tell my friends, I thought to myself, why hasn’t anyone thought about moving the goose?

The HC goose has terrorized students for as long as I have been at Central, and according to former students for even longer. Students get attacked by it when they are trying to walk past it. No one is safe from it. No matter how hard you try to be inconspicuous, he/she will notice you and then attack with no warning. The goose poops everywhere and people have to watch their step in order to avoid it. While no one thinks of geese as dangerous, they aren’t just your average avian.

“I do track and field and right now we are in the outdoor season, and every day there is goose poop everywhere. And even worse, when we try to leave after practice is over, the geese are blocking the exit closest to my car and they refuse to move because they are defensively guarding their babies, and literally hiss at me and my friends,” said Chigo Ojiako, sophomore. “I’ve been attacked by one before (it flew straight at me and hisses/batted its wings at my face, and then pooped next to my feet before taking off into the air. It was terrifying.) It was fun at first to see the geese up close and make noises around them and such, but now it’s literally becoming a problem and I’m tired of having to walk all the way around the school to avoid the exits that they block, and I’m tired of stepping in goose poop every two feet.”

Goose poop can have dangerous strains of diseases including E. Coli, Salmonella, Histoplasmosis and Giardia to name a few.  The goose seems to turn up during the spring season, which is when they are more aggressive towards anyone who presents a threat to their young.

“It’s pretty normal actually that we have geese here because we are right in the middle of their migration path,” said Harry Priester, senior. “I don’t think [the goose] should be removed because although some people are scared of them [it has been] here before us and we would be kicking them out of the territory that we already tried to steal from them.”

When I posed the question of relocating the goose to the school, 120 students responded, and a vast majority disagree with me. Most people said the goose adds to our school spirit and it is part of the school’s culture.

“Personally, I love the goose because it is our school’s beloved icon. He is the symbol of our community,” said Annie Ness, sophomore. “I do not think it would be safer [if the goose was relocated] because although the students would not have the goose chasing them through the courtyard, what would we all do without it? [Students] would have to resort to dying of boredom while walking through a courtyard without their favorite icon waiting to greet them. I think it’s worth the risk to keep them.”

I disagree; I’m not sure what the goose adds to our school other than anxiety when crossing paths with it. I have also heard that there were fake coyote signs around the school, which is used to scare away geese. So if those are in place, that seems to show me that the school doesn’t want the goose around. It also shows that taking measures other than relocation were not effective.

However relocating the goose would be very difficult because geese, their eggs and nest are protected by the Migratory Bird Treaty Act of 1918 making it illegal to move or destroy their nests or eggs without a permit. These permits are issued by the Illinois Department of Natural Resources.

“As much as possible I would suggest altering student routes away from the nest. Using alternate entrances or giving the nest a wide perimeter will help. Teasing the geese is not recommended, but I also don’t suggest running away from them,” said Stephanie Touzalin, a naturalist at the Willowbrook Wildlife Center. “A male goose that frequently gets humans running away from him learns that his ‘tough guy’ act works, so he will keep it up. If people stand their ground and ignore them, they lessen their approach.”

Some students are also known to attack the goose back or throw things at it, which is really horrible for the goose.

“I think humans [should] learn the importance of respecting nature, even if it is a temporary inconvenience. The way we have altered so much of the habitat for wildlife has caused them to have to live closer to us in an more dangerous world,” Touzalin said. “Each animal, no matter how numerous they may seem, plays an important role in the balance of our local environment.”

So for the benefit of the school, the students and the goose, shouldn’t we look into relocating it? Wouldn’t he/she be more happy in an environment where they wouldn’t get pelted by objects and could be around fellow birds? I know it sounds cruel to some to say that I want to move the goose, but I am only looking out for its best interest and for us students.