The ugly truth about Columbus Day 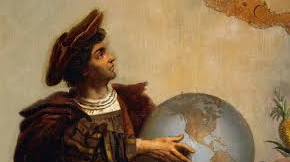 Christopher Columbus sailed the ocean and discovered Hispaniola, leading to the "discovery" of America.

Every year, students across the nation get Oct. 14 off of school to celebrate Columbus Day. This national holiday celebrates Christopher Columbus, the man who sailed the ocean blue in 1492 and was thought to be the first person to discover America. Columbus seems like a decent man, right? After all, he did discover our nation and his voyages ultimately give American students a day off of school every year.

Yes, the Italian voyager Columbus did sail from Spain to the New World and accidentally discovered Hispaniola after looking to find a direct sea route to China. This is true. What many people fail to know, however, is that upon exploring the New World, Columbus acted very hostile towards the indigenous people that were living there.

I think that celebrating a man who killed so many innocent people for power, land, and money is very wrong. The American education system glorifies Columbus to young kids by teaching them about his voyages and discovery of America, leaving out the fact that he murdered innocent Native Americans and enslaved them to work for him.

“I enjoy getting the day off of school, but I hate knowing that I’m celebrating a man who killed so many people,” said Tea Pantelic, senior.

I can’t lie, like any other student, I enjoy getting Columbus Day off of school. However, I believe that there is a clear solution to this controversy. All schools should celebrate “Indigenous People’s Day” on Oct. 14 instead of Columbus Day. This way, people would instead honor the Native Americans killed by Columbus.

“I know many people who now refer to Columbus Day as Indigenous People’s Day, and I think it’s a great thing,” said John Malec, freshman.

I think the Native Americans killed by him need more recognition, and this is a perfect way to do so. In addition to this, students would still get Oct. 14 off of school, and so it’s a win-win situation.

“When you talk about getting rid of the holiday, it’s important that you remember it means different things to different people,” said Ms. Sanskruti Patel, history teacher.

As more people learn about Columbus’ brutal killings and hostile relationship with the indigenous people, I hope our nation does something to inform younger students about this. After all, I personally don’t want to celebrate a man whose legacy is this controversial.