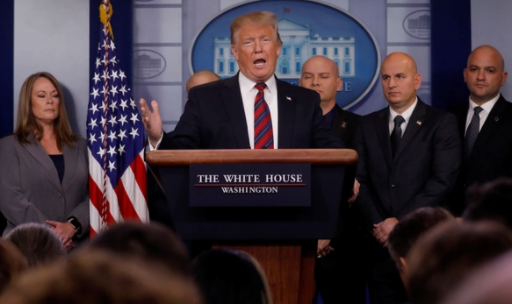 Courtesy of The Atlantic

Trump delivers a message to citizens on ways they can get cured from COVID-19.

On Thursday, April 23, President Donald Trump appeared on national TV from the White House Briefing Room and offered his idea for a cure to the coronavirus: injecting chloroquine phosphate and hydroxychloroquine into the body.

“There is a way we can do something like that by injection inside, or almost a cleaning,” Trump said. “Because you see it gets inside the lungs and it does a tremendous number on the lungs, so it would be interesting to check that.”

Unfortunately, and much to his surprise, it ended up poisoning people instead.

“A president of a country like the U.S. should be clear on his instructions rather than just announcing a drug, and letting people gain hope from it,” said Naya Kelta, junior.

One of the couples that tried this supposed cure ended up being seriously harmed and sent to the emergency room.

“They each mixed one teaspoon of the chloroquine phosphate with soda. Within 20 minutes, the woman began vomiting and her husband had trouble breathing,” said Tara Haelle, writer for Forbes.

Trump also suggested injecting Lysol, a cleaning product, into our bloodstream and lungs to try and kill the coronavirus.

The makers of Lysol responded with incredulity and warnings against injecting disinfectants, as they are highly toxic.

“Under no circumstance should our disinfectant products be administered into the human body,” said RB, the manufacturers of Lysol.

When asked about his previous comments, Trump would claimed it was sarcasm, to “see what would happen.”

“No one, especially the president, should joke on national TV during a world pandemic,” Kelta said.

As a result of this, Trump has lost much support and credibility.