Climate change and natural disasters; can humans revive the planet? 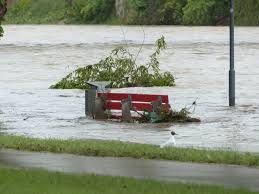 Climate change has been scientifically linked to an uptick of natural disasters.

Global warming causes increased levels of evaporation because of high temperatures in the air and more water in the air, which ultimately causes heavy storms and hurricanes. On the other hand, droughts and fires can occur in places where water is scarce and little to no evaporation takes place. Specifically, around 207 natural disasters were recorded in the first half of 2020 which is more than the 21st century average of 185 disasters each year.

In 2019, the number of natural disasters increased by 27 percent, according to the Intergovernmental Panel on Climate Change (IPPC). The constant changing of our environment is evident, yet people often deny it as a fact since there is not a specific person to blame which ultimately leads to our population avoiding major issues in today’s world.

Mrs. Walsh, biology teacher at Hinsdale Central High School said, “Climate change is causing an increase in temperature, leading to an increase of evaporation which produces more precipitation and is causing stronger and more severe storms.”

For instance, cities near water are more likely to experience very intense storms and hurricanes while cities with low amounts of water/evaporation could experience droughts and wildfires. Climate change has many large-scale effects on earth, one being natural disasters.

“[These trends] have shot up and are increasing at a rapid rate, not showing any signs of slowing down,” Walsh said.

To prevent this issue she advises that “driving electric vehicles,” and building more “efficient homes,” will make a considerable difference.

Students can also get involved with curtailing these effects.

“During my internship with Nasa, we mainly focused on the effect that climate change has on animals,” said Alexandra Collins, senior and Ecology Club president.  “Since the climate is constantly changing there will be an impact on species whether it is negative or positive.”

According to Collins, climate change is complex and important to understand since it has many negative impacts on the environment and it’s our job as humans to learn how that change is going to occur.

Furthermore, she brought up the importance of collecting data.

“A significant amount of data can be gathered by citizens,” Collins said. “With this, when scientists have access to more data they can grasp more key concepts and find similar trends to pinpoint the key factors involved in climate change, therefore, it’s important that we students and citizens fulfill that role and for us students to be educated and expand our knowledge on this topic.”

We might not realize it, but scientists around the world are working daily towards decreasing the amount of natural disasters and climate change, so why not take some time out of your day to learn more about your environment and collect data for these scientists, working towards the end goal of disputing this matter.

According to science teacher Melissa Jensen, humans can head in the right direction by getting educated and learning as much as possible about how climate change affects everyone.

With learning and gaining all this new information, we truly need to understand the significance behind climate change and how much large-scale damage it can do to our world. Climate change is no longer a theory, but a proven fact, and what you do makes a difference but it’s up to you to decide what kind of difference you make.