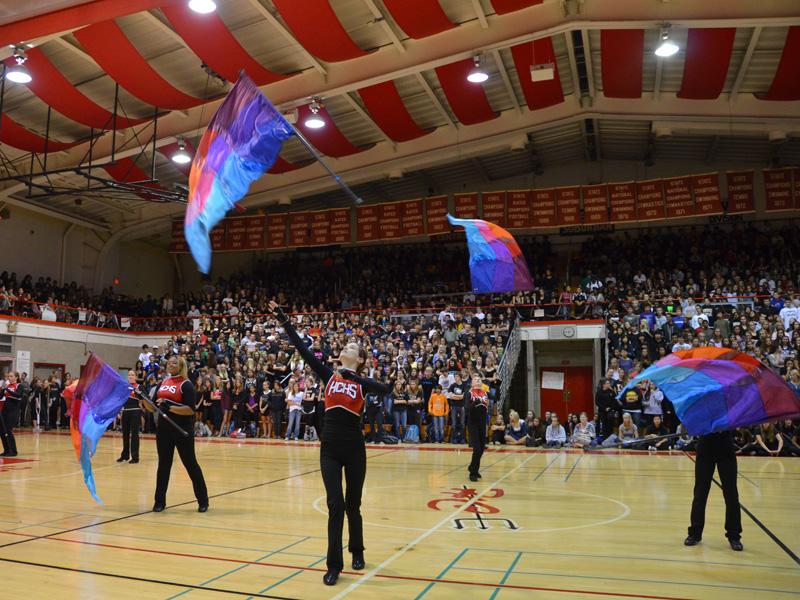 “It totally could be a sport.” Dimarco said.  “It is a sport as much as poms or something else is. It definitely requires physical strength and exertion.”

The color guard is classified as an activity; it is not a part of IHSA and does not receive money from athletics, but that doesn’t mean that these girls aren’t working just as hard as any other sport. In fact, Dimarco claims that the girls’ arms are particularly built due to the flag twirling. “A difficulty is the arm strength. It hurts at first to build up the muscles,” Dimarco said.

But that’s not all. It takes practice to learn how to use the flags properly. “Most of them are afraid to toss the flags at first. It takes a while to get used to letting it go and actually catching it without hitting your head. Everyone gets hit occasionally!” Dimarco said.

The color guard girls do not have practices every day since they aren’t considered a sport, so they have to take the flags home in order to perfect their moves. However, according to Dimarco, the limitations of the activity do not take away from the experience, and it’s a relief to the girls.

“I don’t think that it’s bad that it’s an activity because it’s nice for them to be involved in other things. Some sports take all of your time and you can’t do anything else. Some of these girls are involved in a whole bunch of other things, and they have the time to do that and the color guard, so that’s nice,” Dimarco said.

The freedoms of this activity make it more enjoyable for the girls. So enjoyable, in fact, that there was a growth in the team over the past year. The color guard recently went from a team of fifteen members to a team of twenty-one. Because of this, additional fundraising is needed for the team. They held a car wash at the end of September.