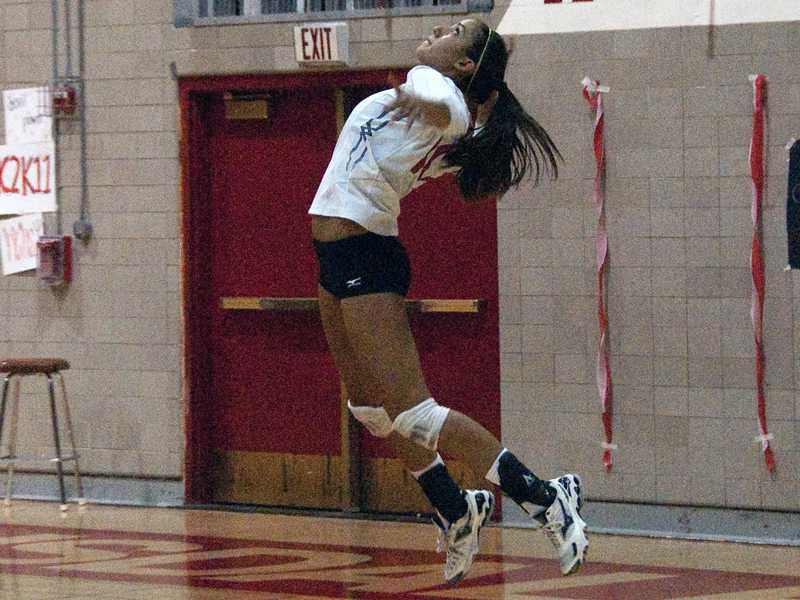 The girls varsity volleyball team prepares for the upcoming tournament and playoffs.  This year, the volleyball team hopes to win conference and to win state. “Going downstate is the biggest goal,” said senior and outside hitter Ally Davis.

To reach their goals, the team has watched film and put a lot of effort and time into practices.  According to Coach Kellough, during practice the team works towards being prepared for each match. “Whenever we step on the court, we get better,” Kellough said.  She sets up practice to include court movement, skill work, and team work. “ I think we haven’t reached our full potential yet,” Kellough said.

“Every year is a little bit different,” Kellough said.  She adjusts her coaching routines each year to best fit the personalities and skills of the girls.  The team’s dedication is obvious in through its desire to win and its hard work at practice.  “All are heads and hearts are in it,” said senior and outside hitter Katie Grabowski.

“I play to our strengths,” Kellough said.  She uses the team’s best skills and works to improve them.  “One of our goals is to always play to our highest potential,” said senior and right side player Emily Grasso.  Playing to their highest potential helps the team stay focused during the game so that it will end with a positive result.  Kellough encourages the girls to be vocal and lead by example. “[I want them to] be themselves and push them out of their comfort zone,” Kellough said.

This year’s rising players include junior and libero Rachael Lenderman and junior and defensive specialist and outside hitter Coco Bergdoll. “They bring skill, energy, and spunk,” Kellough said.

Returning seniors are Ally Davis, Katie Grabowski, Ellie Van Keirsbilck, Emily Grasso, and Sanne Hilbrich. Other returning varsity players are junior Meghan McDowell, a setter and right side player, and junior Lucy Crofton, a hitter and middle player, and junior Gabby Rutkauskas, a practice player and the team manager. Rutkuaskas fills positions in for drills, runs drills, and records stats during games. “She is an incredible asset to the team. She really has been a huge help to us so far, and we’re thankful for her willingness to give her time and energy to the team,” Kellough said.