Red Devil gymnasts get into season 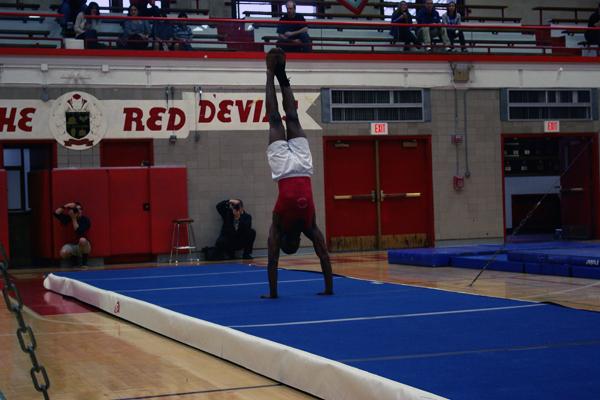 The boys’ gymnastics team had a dual meet at home March 12 against Downers Grove North. All three levels (freshmen, jv, and varsity) competed at this meet.

The freshmen and jv teams won. Varsity, however, lost. The DGN team is one of the top teams in the state. “We are in conference together, but right now, they are ranked higher than we are,” said Assistant Coach Myles Laffey.

The highlight of this meet, according to Laffey, was senior Jamel Redmond achieving his personal best. Redmond works the floor and the vault. At this meet, he got a 9.0 on floor. For this, he won the Red Devil Award for the meet. “He was kind of the gymnast of the meet. He did so well, his personal best, so the coaches thought he deserved it,” Laffey said.

“There’s a great talent-base down at the jv level,” Laffey said. According to Laffey, the jv team is led by four strong sophomores: Sam Pielet, Ray Zhang, Alex Gelz, and All-Arounder Jack Schmidt. “We expect that many of the jv team members will eventually contribute to varsity by the end of the [season],” Laffey said.

The freshman team is led by specialists Mike Zervogiannis, Ramsey Husayni, Aiden Quirini, and Tony Taylor, and All-Arounder Luke Letizia, Laffey said. There are 11 gymnasts on the freshmen team this season, many of whom do multiple events, according to Laffey.

“We are expecting that varsity will improve over the season, with the addition of some jv members,” Laffey said. “We are hopeful that the big group of seniors will lead our team to state, and that they will do that one meet at a time, improving in practice every single day, and bringing underclassmen up to where they need to be. The jv will certainly contribute as time goes on; we are just keeping the jvtogether right now.”

The next meet for the Red Devil gymnasts is the annual Krupicka Invitational, held in honor of Neil J. Krupicka, who was a coach at Central for 34 years. Laffey said, “We are excited about the season, and we are going to do our best.”