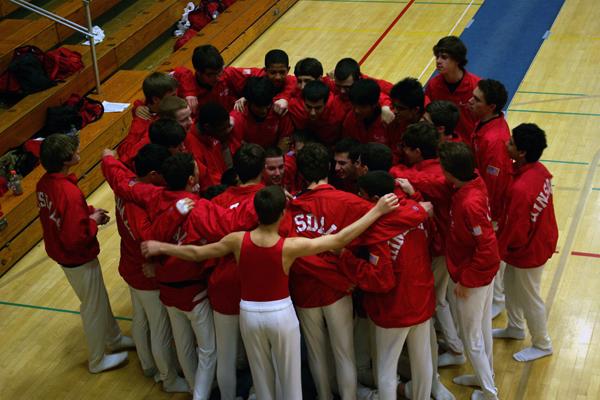 On May 12 and 13, the boys gymnastics team went to state and won 8th as a team.  The event was held in Frankfurt, IL at Lincoln Way East High School.

Team and all-around competitions occurred at the school on Friday, while the individual tournament was held on Saturday.  The top eight teams competed against each other for the top score and state title.  Meanwhile, gymnasts who competed individually in all events vied for the all-around title.

Though the team was generally satisfied with its state experience, many of the members were disappointed about the turnout over the weekend.  “The team didn’t do as well as it would have liked to, and the pressure definitely got to some people,” said Alex Gelz, a sophomore. Alex Gelz was unfortunately unable to perform during state due to an injured shoulder, but still participated and watched the experience.

Ray Zhang, a sophomore and member who performed in the team competition, explained the situation.  “State went alright, it wasn’t great, but it wasn’t terrible. We didn’t do as well as we had liked, but we were very happy that we made it that far in the first place,” said Zhang.

Overall, Leahy stated that the team was satisfied with the final outcome.  “We placed 8th in state, but made our goal of making it to the team competition, which was all we really cared about doing,” said Leahy.

Preparing for the tournament was no simple feat, however.  Schmidt described the intense training culminating in the team’s state status.  “Going into sectional week, the week before state, we were seeded as ninth in the state,” he said. “That meant that we would just miss going to state. Our coaches worked us extremely hard, and to be honest, that week was pretty exhausting. Every person on the team did tons of routines, and overall we improved by almost three points, enough to bring us to the number seven spot.”

For the few days immediately before state, however, the team’s rigorous training seemed to cool down a little.  “We were more relaxed and concentrated more on doing fewer routines and doing more stretching and keeping ourselves from getting sore and only working parts that needed to be worked on,” said Leahy.

Schmidt reflected on the hard work that accounted into getting state and explained that he was still glad about the outcome.  “Although we didn’t do as well as we hoped, the fact that we had gotten to the thing that we worked so hard to reach was the ultimate prize,” he said.

“It was a great way to end my senior year since we missed the cutoff last year and we wanted to make it so badly and actually did,” Leahy said.

Overall, the team was glad with its achievements from over the year and managed to learn from the event.  “State is something that we didn’t even imagine getting when we first started season. The idea of state, now, seems like it’s the goal of any team that works and ends the season together,” Zhang said.

Gelz described his excitement about recovering and hopefully returning to state next year.  “I am very anxious to get healthy and start working again. Hopefully the team can make it back again next year, but it will take a lot of hard work from everybody,” he said.

Schmidt agreed and stated how the lessons from gymnastics have helped him even outside of the sport.  “The motto of our team is ‘hit form win,’ which applied to daily life means that if you execute all of your actions with a clear direction and great focus, you will accomplish your objectives,” he said.  “Gymnastics has taught me a lot about focus; it not only decides whether you hit a routine or not, but without simple focus you can find yourself in a sticky situation.”

Leahy, as a senior, explained his newfound appreciation of the sport and what he has taken from his four years.  “I took away a greater appreciation for my four years as a central gymnast because it really went by so quickly and I didn’t even realize it. It was a tough four years but I really think that it has prepared me for work in the future,” he said.

Abdul-Rahman Zakieh, senior, agreed, stating how the extracurricular offered him something truly unique over the past four years. Zakieh said, “Its impact on my life is unparalleled by any other extracurricular activity, and its widespread application can be translated into almost any real life circumstance. I really did enjoy these last four years and I know I will remember them for the rest of my life. HIT, FORM, WIN!”