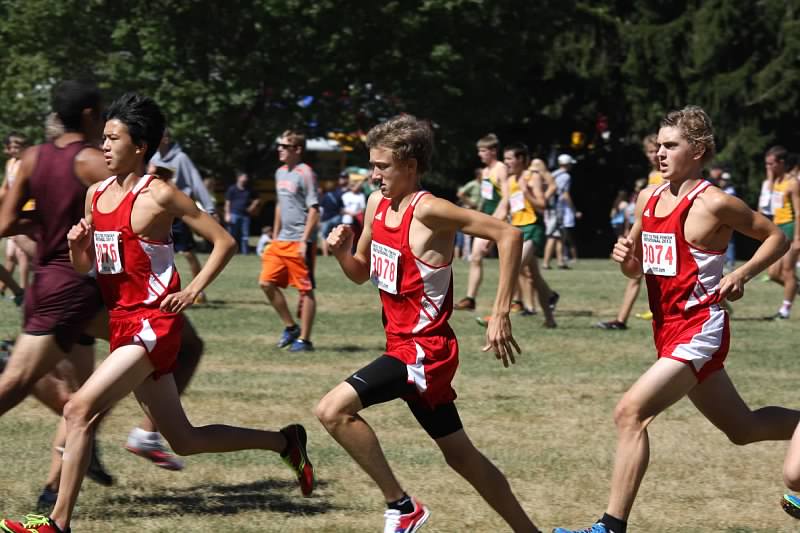 Billy Magnesen, senior, of boys’ varsity cross country knew that the team was due for some success at the track after a hard summer workout, but he could not have predicted the team’s first victory at the Hornet-Red Devil Invitational since 1992, or Magnesen’s finish as first in state. It was the first meet of the season.

“We worked hard, just as hard as any other team in the state, so we knew it wasn’t going to be a surprise if we come in first, but we knew it would be awesome if we came in with a win,” Magneson said.

Emmett Scully, senior, finished 10th in the meet, while Kevin Huang, senior, Matt McBrien, junior, and Alex Domiano, junior, all picked up medals for ranking in the top 20 at the meet. Josh Feldman, junior, and TJ Caveney, senior, ranked within the top 50. More information about the individual and team rankings at the invitational can be found here.

The team is aiming to get achieve at least third in state this year. Hinsdale Central hasn’t gotten into the top five in over a century, but that isn’t deterring the team from their goal.

“At this point we’re very hopeful and confident. It’s clear that we’re doing the right things up to this point, but we are not even close to strong enough to achieve what we want as a team. There’s a lot left to be done but right now things look bright,” Scully said.

Huang attributed their recent victories to the “culture of success” hammered into the team by Mr. James Westphal, their coach. “We always show up to practice, and everyone-from our top guys to those that are just seeking to get in shape-gives it their best,” Huang said.

The team had high expectations for this season even during the summer. “It was the first meet in a long time, and we were looking to do the best we can. Going into the race, we were going against some of the best teams in state like New Trier was ranked ahead of us, and Wheaton Warrenville South was ranked ahead of us, so we were just going in and hoping to do the best that we could,” Magnesen said. “We went in, we ran hard, we competed, and we came home with a win.”