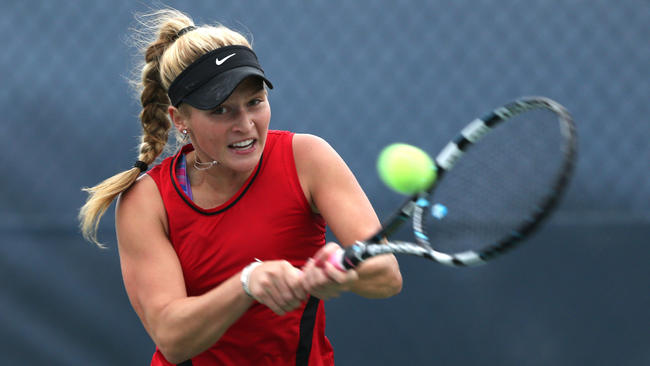 courtesy of the Chicago Tribune

Junior Bella Lorenzini won the Singles State title along with the girls' tennis team's state championship finish this year. The singles title hadn't been captured at Central in 30 years.

This year the Hinsdale Central Girls’ Tennis team continued to dominate the state of Illinois in the IHSA State Competition. They did this by winning the third straight State Title for the program, and Bella Lorenzini was among that dominance. The 29th ranked college recruit for the class of 2017 played singles throughout the whole year, and became the first student in 30 years to win the Girls Tennis Singles State Title.

“The entire tournament was long and tiring,” Lorenzini said. “But the Semi-final match [against Asuka Kawai of Palatine High School] was the toughest match on the way to winning state.”

Lorenzini comes from a family of tennis excellence, with her older sister Caroline winning consecutive doubles titles in 2010 and 2011. “Tennis has always been a huge part of our family and I’ve been playing since I was seven years old. It’s awesome to see my siblings and I succeeding after years of hard work,” Lorenzini said.

With one final year left at Central, Lorenzini is clearly aiming for a second consecutive state title in Singles next year. She also plans on continuing to play tennis at the collegiate level.