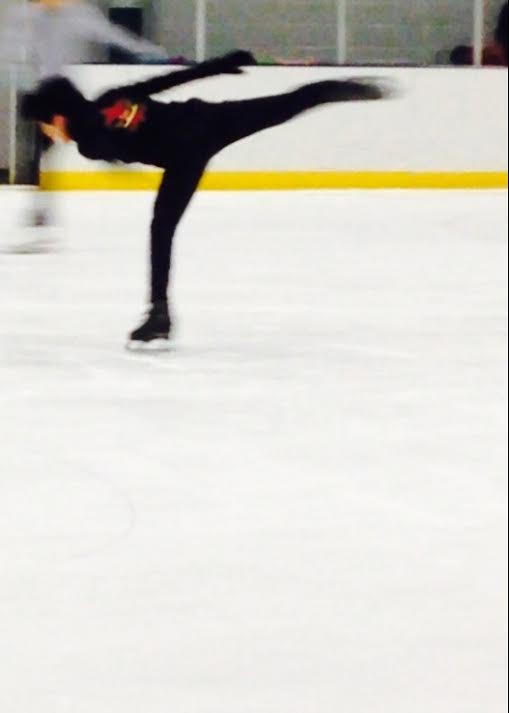 Sophomore Joonsoo Kim trains in figure skating year long in order to compete in national competitions. His love for the sport has only grown and he hopes to one day compete in the Olympics.

The chilly interior of the Darien Sportsplex surrounds a figure skater as he flies across the ice. He leaps and spins, landing with a coordinated precision that reveals hours of rehearsal.

Joonsoo Kim, a sophomore, has been figure skating for the past six years. Starting at the age of nine, his passion for figure skating has only grown.

“Figure skating is … a hobby to let go of my worries and put all my aggression into,” Kim says, smiling. Although figure skating is relaxing for Kim, it also requires a lot of expertise. He practices almost every day of the week.

“I just practice whenever there’s ice time on the rinks,” Kim says. “Ice skating is 80 percent jumps, so I practice those mainly, but also spins and program run-throughs, which is like doing the whole thing with the music.”

Central also supports Kim’s packed schedule and does everything it can to help him achieve his ambitions.

“Since I went to Nationals and won, I made it to sectionals, which is in only 22 states, and because of that, the school is exempting me from PE,” Kim says. “And since I don’t have an elective, I have two class periods off, so I can leave after lunch. That’s vital to my skating time because it requires a lot of dedication.”

Amy Guo, a sophomore and friend of Kim, is one of the many students that is amazed by Kim’s ability to seemingly do it all.

“He’s really smart and nice and his handwriting is like a font …and he’s really good at figure skating,” Guo says. “His first impression is kind of like the perfect student.”

On top of his vigorous academic agenda, which contains all the hardest classes that Central offers, Kim has been preparing for the next National figure skating competition.

“I actually have a competition in two weeks,” Kim says. “It’s the qualifying round for Nationals, which are in January.” Kim has had a lot of success at Nationals so far in his career. “I actually moved up a level every year, which is pretty uncommon because most people stay in the same level for two years,” Kim says, with a modest shrug of the shoulders. Kim has won several competitions already, but continues to set his goals even higher. He emulates Yuna Kim, Olympic gold medalist, Mao Asada, a Japanese skater known for her flexibility, and Patrick Chan, Canadian Olympic skater.

“My ultimate goal is to compete in the Olympics and represent the USA,” Kim says. “That would be a dream come true.”