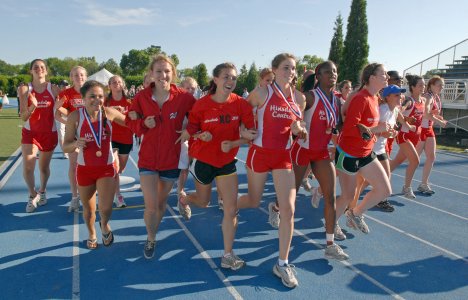 Courtesy of My Suburban Life

The Girls' Track team is currently preparing for their next meet on April 4.

On March 17, Girls’ Track and Field competed at the West Suburban Conference invite hosted at York High School. This meet marks the middle of the season and one of the last indoor meets for the team, as after spring break the meets are held outdoors.

“The season has been going really well. The varsity team placed fifth [at indoor conference] which was a good start going into the outdoor season,” said Bella Pisani, sophomore distance runner.

Each team member is focused on personal improvement as well as enjoying their season. The girls also hope to make a state run with several of their events.

“A goal I have is to qualify for state in the 800 meter, mile, and for our 4X800 meter relay to win [state] again this year,” said Kayla Byrne, sophomore distance runner.

Many of the runners on the team have participated in the sport for years, and team bonding is a key part of their success and enjoyment.

“My favorite part of track is putting in hard work with my teammates,” Pisani said. “I also love when everyone is cheering for each other at the track meets. It’s such a fun environment to be in.”

Because there is still a sizeable amount of the season remaining, the athletes are focused on concentrating on both improvement and engagement with the sport.

“Something tons of people don’t understand is that running is 95% being mentally tough, and a basis to [this] is having faith in yourself,” said Caitlin Chval, sophomore distance runner. “Coach McCabe constantly reminds us, ‘Doubt kills more dreams than failure ever will,’ and above all I want to become more mentally engaged than I am currently.”

The girls’ next meet is at home on April 4 at 4:30 p.m. This is one of six meets leading up to conference championship held at Glenbard West on May 6 at 9 a.m.