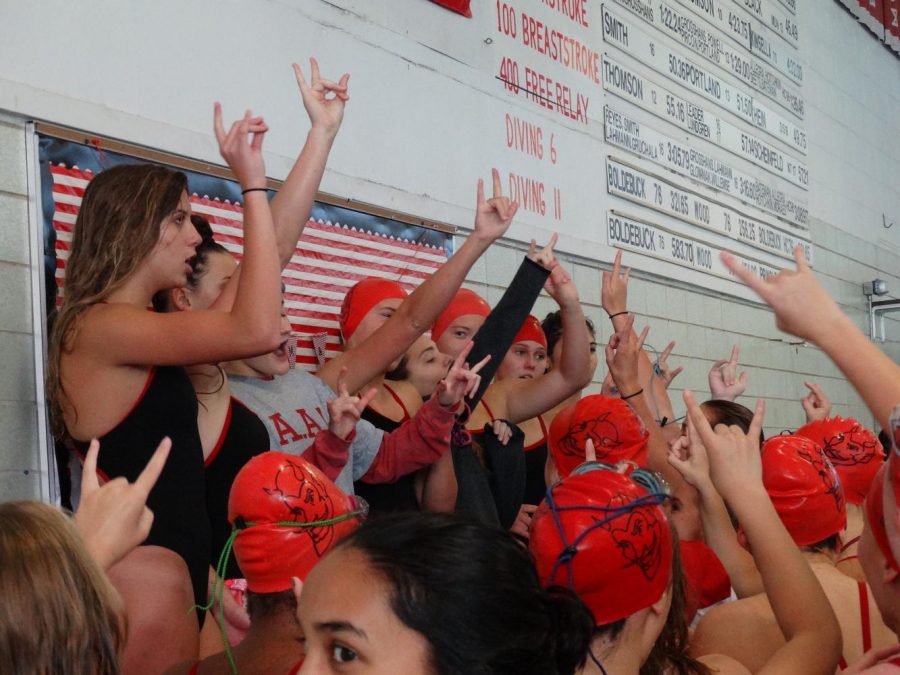 The seniors lead the rest of the girls swim and dive team in team cheers during every meet.

Teammates, coaches and parents celebrated seniors for their last season on Sept. 21 during the annual senior night.

The event was held during the home meet against Glenbard West, which resulted in a win for the Red Devils on the varsity, JV, and frosh soph levels.

During a break in the meet, the spotlight was put on each individual senior as their names were announced to the crowd one by one.  Once their name was called, every senior, with their parents following closely behind them, proceeded through a tunnel made by pairs of sophomores hitting kickboards together and was handed a flower by the juniors.

Presentation slides that were created by the senior about herself were projected on a screen on the pool deck for all to see as they proceeded through the tunnel.  The slides included pictures of themselves throughout their time on the swim and dive team, the names of their parents, what they are hoping to do once they graduate, their favorite part from their time on the team, and their advice for next year’s team.

This tradition is guaranteed to provoke tears from the parents, underclassmen swimmers and divers, and the seniors themselves.

“[The girls swim and dive] senior night is super different [than the other teams’ senior night] because I’m pretty sure we’re the only sport that cries,” said Grace Thrana, senior swimmer and co-captain.

The pool was decorated for senior night.  The previous evening, all of the junior swimmers and divers got together to make posters for the seniors.  The posters were superhero themed and each senior got a poster dedicated to them.  Pictures of the seniors and a banner were also hung in the pool area.

“But then [there’s] the meet itself during senior night; I like to be able to watch the girls swim in black caps,” said Mr. Bob Barber, head coach.  “They’re very proud of standing out.”

“Dinner is always nice because it’s an opportunity to go out and enjoy the evening without thinking too much about swimming itself or the pressure of a meet,” Coach Barber said.

Although senior night takes place in September, the event is meant to give the seniors a chance to say a formal goodbye to the team that, for many, has shaped their high school experience and will continue to impact them past high school.

“[The team] is a really big family and a lot of my friends have come out of the swim team,” said Maggie Neil, senior swimmer and co-captain.  “I think it’s made a lot of impact [on my life] because it has shaped who I am and it has made me a stronger person.”

For Grace Thrana, being on the team all four years of high school has taught her how to be dedicated and determined.

“This environment creates a really special friendship bond and I think that senior night is one of the first times that the girls recognize that it all might be over, and now it’s going to be on them to maintain those relationships and friendships,” Coach Barber said.

The entire night had a bittersweet feeling for many seniors, as they are sad to say goodbye to the team that has given them so much, yet excited for what’s to come and grateful for the memories that will stay with them forever.