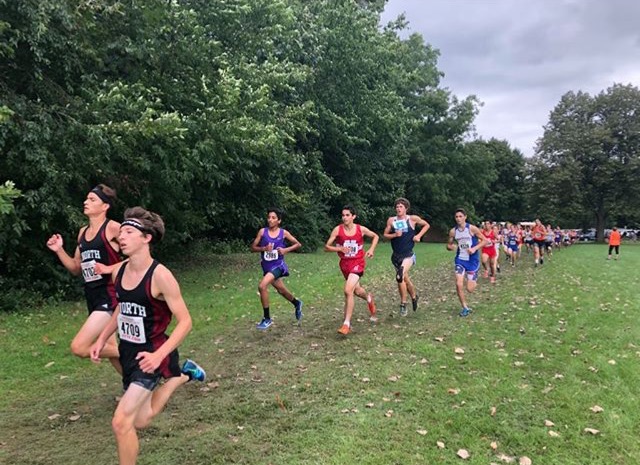 Cross country runners raced against each other at Detweiller Park in Peoria on Sept. 8.

On Saturday, Sept. 8, the boys cross country team competed in the annual First to the Finish invite. The boys brought down 25 runners and placed 14 on the varsity level and third in the junior varsity open race.

“We were missing a lot of key guys, so our varsity was not at full strength. Either way, it was an early season meet, and we still have good blocks of training ahead of us,” Amin said.

The boys’ varsity team was missing seniors Alec Hill, Keegan Caveny, Fletcher Spillers, and Nick Sutton, as they were all either sick or injured.

“We had some guys step up on the JV level. Jack Gerami placed at 14. He’s been putting in the work and now it is showing,” Ricker said.

The meet took place in Peoria and is the same course as the state meet.

“This course is always super fast, and it offers good practice for when state comes in November,” said Keegan Caveny, senior.

This meet was the first of this year, as the Hornet-Red Devil invite on Sept. 1 was canceled due to weather. The next meet will be the Warren Invitational on Sept. 15, and only the junior varsity runners will compete.