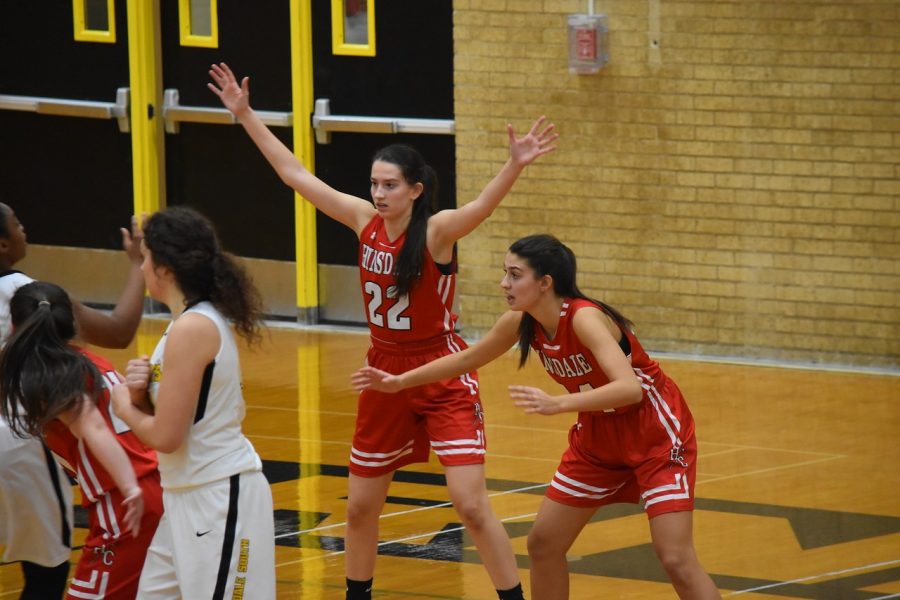 As the timer counts down to game start, the Girls Basketball Team gets in a huddle, hands around each other. Tina Rivera and Maddie Bokich have excited and determined looks on their faces as they both yell their pre-game speeches to the team over the loud music, playing in the gym. The team claps, like a nervous heart beat, starting slow and getting faster as time continues to tick down. “Devils on three,” Tina cheers. “1, 2, 3, Devils” the team screams before they run around the border of the court to begin warm-ups.

As warm-ups come to an end, Rivera and Bokich follow Coach Persinger to meet with the referees and the other team. They shake hands and then go back to their row of chairs that are lined up courtside. The rest of the team follows. They get in another huddle, one last speech is given by Coach Persinger and the starting five girls sit down and relax until their names are announced, booming on the speakers. They jump out of their seat, rip off their warm up jersey, high five the rest of the team and get into their starting positions. The game then begins.

Now in their sixth week of the season, the girls Varsity Basketball team has a 1-6 record with many more games to come. Their record has not stopped the captains from staying positive and wanting to improve. Rivera, senior, is in her second season on varsity, her and fellow senior, Bokich, lead this year’s team as captains.

Rivera has played on the basketball team all four years, and she plays post along with her younger sister, Maria Rivera, sophomore on the varsity team. The Rivera sisters started playing basketball when they were seven years old. In addition to school, Tina played club basketball for The Lady Lightning and Taw.

Tina played many sports when she was younger including, bowling and archery. Tina was a part of the volleyball team at Hinsdale Central until senior year.

As one of the captains for the basketball team, Tina has many responsibilities off the court.

“All the equipment is our responsibility; we do all the behind the scenes stuff like making the playlists and organizing the pasta parties and Secret Santa,” Tina says.

Although Tina and Bokich take part in  “behind the scene” actions, they also have many on the court responsibilities as well.

“We always are the ones that call it out at practice and do the things any other captain would do,” Tina says. “We are like a family of basketball people.”

Some say having a sister on the same sports team can be challenging and annoying, but for the Rivera’s it’s a dream come true.

“It’s always been my dream to play with her on varsity since I began playing,” Maria says. “Having a sister on the team, you connect differently, and sometimes I just know that we are going to pass to each other.”

As for the team chemistry, both captains plan to continue their positivity throughout the remainder of the season. The next game is Friday, Dec. 21 at Lyons Township High School.