Wassel and Venckus dive in different ends of the pool 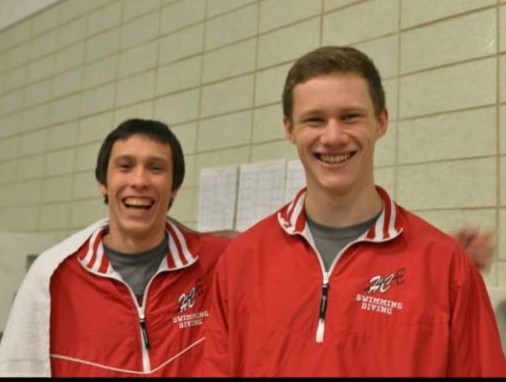 When watching seniors George Wassel and Rokas Venckus at Central’s Swim and Dive duel meet against York, it becomes immediately clear that the two represent two different types of divers. On the board, Venckus stands with rigid poise and a blank expression, while Wassel maintains an upright position with a look of deep concentration. Venckus leaps of the board with instinct and precision while Wassel jumps with a more calculated grace, but their styles are not the only difference between the teammates.

This is the first year Wassel has been a part of the dive team. “Rokas just convinced me to come out for the team, and I’ve been doing it ever since November,” Wassel said.

New to the world of diving, Wassel faced the psychological fears associated with the sport. “I was a little bit scared at the beginning,” Wassel said.

Now after time, the novice diver has conquered his nerves. “I would literally just throw my body into the air and hope for the best—that’s how I overcame some of the stuff. Rokas can attest to that,” Wassel said.

Wassel’s technique of haphazard diving is affectionately referred to as “body-checking” in the diving world and, according to third-year diver Venckus, it is an important stepping stone to success.

“In the beginning when you start diving, it’s not diving. It’s just throwing your body and try to make it look like a dive when it really isn’t,” Venckus said. “It’s a beginner thing to do; that’s how you learn to dive. You start with body-checking and then you add form to it. [Eventually] it becomes a dive and actually looks graceful.”

Like Wassel, Venckus first joined the team due to a friend’s influence. “I decided to come out for diving because [in my] sophomore year, I didn’t have anything to do in the winter and [fellow senior diver] Sam Pielet persuaded me to join diving,” Venckus said. “After the first season I really felt that I wanted to come back, so I did.” Now, Venckus serves as both a varsity diver and a mentor to Wassel.

Recalling his favorite memory in his three-year tenure, Venckus tells of a meet in his first year of diving where he made a deal with his coach. “He said he would give me a ten if I would throw a dive I had never done before: an inward one and a half, which is a pretty difficult dive. I had never done [the dive] before, and it was at a meet, so coach told me either do an inward dive and get whatever score I get or do a one and a half and get a ten,” Venckus said.

Venckus decided to take the risk and go for the ten. “Nobody has ever seen a ten since and that was two years ago. The other coaches gave me a four and the official gave me a four point five, so it [probably] did not deserve a ten,” said Venckus, laughing. “I think what deserved a ten was my determination to do that dive.”

Though Wassel does not have nearly the same amount of experience as his teammate, he can still label his top moments as a diver. “One of the big reasons I joined was so I could learn how to do a gainer, and now I can do a gainer, so mission accomplished,” Wassel said.

Although the teammates agree that they will not continue diving through college, they look forward to summer when they can show off their skills at public pools. “The last leg of my journey is public pool diving,” Wassel said.