Central vs. South girls’ bowling: Not your average rivalry 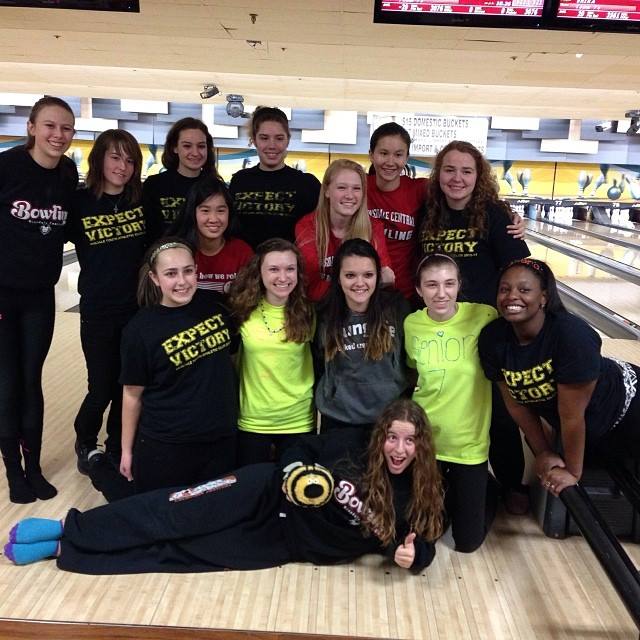 As senior Zoe Wong’s bowling ball knocks down the pins at the end of the lane, she turns around to a loud chorus of cheers. However, these cheers aren’t just coming from Central bowlers. They are also coming from bowlers on the Hinsdale South team.

Amidst the rivalries that high school sports often foster, the unique friendship between Central and South’s girls bowling team stands out.

“It’s just a really neat environment to see that unity between South and Central. It’s a really good show of not only sportsmanship, but the idea that sports are something that can help you build friendships,” said Ms. Sanskruti Patel, bowling coach and social studies teacher.

This friendship has also grown quickly as the girls first met each other at the Hornet Invite at South this past January.

“From then on we pretty much all became good friends and at the next few meets in which we were both at we really connected and realized how alike and weird we all are,” said Faith Most, senior at South and bowler.

However, the teams have more than just their new friendship to celebrate; Central and South both qualified for this Saturday’s sectionals meet. Only the top four teams, out of 11, qualified for sectionals. Central finished third and South finished fourth.

“This year has been the most successful season in the history of Hinsdale Central girls bowling. We didn’t expect to make it at all, but we bowled really well at regionals,” Wong said.

It is also the first year that the IHSA has added a regionals round before sectionals. In past years, the state series only consisted of a sectional and state tournament, and Central’s team had never made it past sectionals.

“It’s unprecedented for the girls bowling team to have made it past the first round,” Patel said.

Patel believes that a large part of the team’s success has been the dedication of its members.

“A couple of the girls joined summer leagues and they committed a lot of time outside of the season to do well. And we have a team have really benefited from that,” Patel said.

Despite the anticipation for the sectional tournament, members of both teams are relaxed and excited for more chances hang out.

“We were all overjoyed and knew that we had to have another pasta party,” Most said.