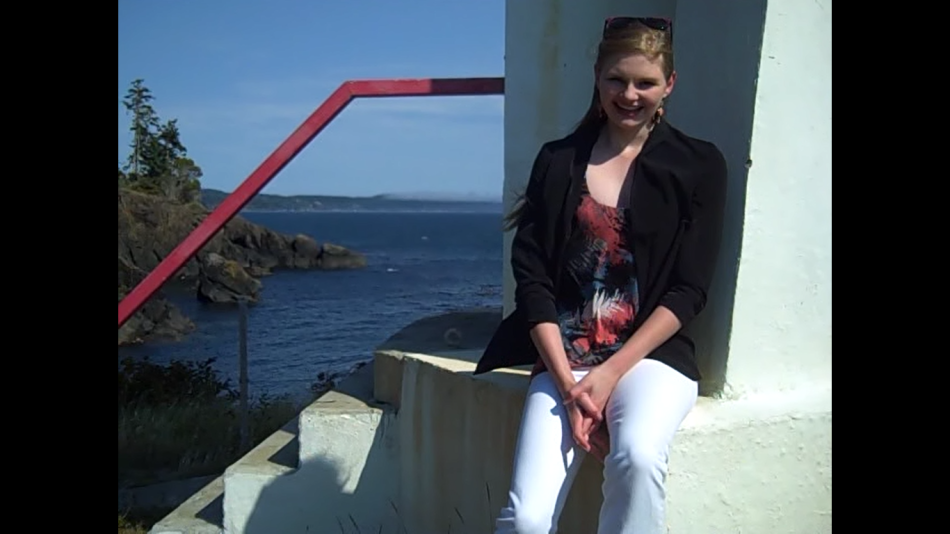 When most students envision school breaks, they think about vacations, relaxing with family and friends, and maybe a part time job or internship in the area. Senior Rebecca Quinn’s breaks however, take on a much different feel – they involve Canada, a lighthouse, and a lot of paper.

Quinn is the head researcher and writer for the Sheringham Point Lighthouse Preservation Society, which seeks to care for Sheringham Point lighthouse on Vancouver Island Canada. The lighthouse overlooks Strait of Juan de Fuca and is not very well preserved because of its rural location. Therefore, the society is not only focusing on maintaining the lighthouse but also on raising funds to buy the site from the government and designate it a natural heritage site, both of which would give the society more control over the land to allow for better preservation.

The job came about the summer after Quinn’s sophomore year when she and her family were spending time at their cottage in Vancouver, and Quinn was looking for something different to do.

“One summer I was just looking for something to do, maybe volunteer-wise, and I asked my mom to ask a neighbor, who happened to be the president to the society, about any volunteer opportunities in the area. It came back that he desperately needed someone to organize all of these historical files he had about the lighthouse, but all of the other members he asked were too busy,” Quinn said.

Initially, Quinn did a lot of paper shuffling in order to organize all the documents and really paint a picture of the lighthouse’s history. After going through the documents, she began putting together all the information that she found into a book.

“I started by cataloging this very messy pile of letters and receipts and maps and land deeds. From there, I wrote down a timeline so we would have actual dates of when the various keepers were at the light, and then I started writing this little book,” Quinn said.

The History of the Sheringham Point Lighthouse is a 20 page book with pictures and documents that cover the lighthouse’s history, from its founding in response to the horrific 1912 Valencia shipwreck to its decommission in 1987 as a result of increased use of Global Positioning Systems and satellites.

“It is there because the strait it shines out on, Strait of Juan de Fuca, is one of the most treacherous straits. There have been over 240 ships that have sunk along a comparatively small stretch of water since someone started documenting the wrecks in the 19th century. One of the worst wrecks was that of the Valencia, whose horror is outshone by only, you guessed it, the Titanic,” Quinn said.

So far the book has sold 1,000 copies, and a second edition is in the works. All the proceeds from the book will go toward purchasing the lighthouse.

“ Nobody expected I would end up writing this; we all thought I would just get stuff in order and that’d be the end of that,” Quinn said.

While researching for her book, Quinn did more than just paper shuffling and writing though. Much of the research involved visiting museums and talking to people.

“As the researcher, I basically go through old files, visit archives in museums, and interview people that were connected with the lighthouse. All of the lighthouse keepers are dead now, save maybe the very last, but that is a confusing story that I haven’t been able to untangle yet,” Quinn said.

Aside from her job as a historical researcher, Quinn’s job description involves running the society’s social media, which includes everything from Facebook to Twitter to YouTube.

Ironically, Quinn doesn’t use these social media sites for personal use. Nonetheless, she has gotten adept at using the different social media sites. One of her favorite sites to work with is YouTube, where she is able to post video interviews of people who are connected with the lighthouse.

“I go around and interview people who have been connected with the lighthouse, and then I’ll make a video of that and publish it to YouTube. Sometimes I’ll transcribe it to put it on the society’s website too. It can be a lot of fun,” Quinn said.

Quinn’s publicity work for the society comes in the good old form of ink and paper as well.

“I also write various articles for local newspapers up in British Columbia, from everything about the massive pot of un-contained mercury that the lens used to sit and rotate in, to the ghosts that haunt the land,” Quinn said.

Overall, Quinn has enjoyed her experience working with the lighthouse, and although she doesn’t perceive that she will have time to continue her work in college, she hopes to do similar work in the future.

“I’d very much like to keep working with the society in college, but I somehow can’t see that being possible as I won’t necessarily have the summers to just go up there and do research. I do hope that I can continue to something like this because I really did enjoy pulling all of this information together and writing it down. There was something neat about being the first person to get this all together,” Quinn said.

For those that may be interested in pursuing a historical job such as the one Quinn has, Quinn suggests pursuing your interest and putting yourself out there as there are often many opportunities for high school students to get involved.

“Historical societies are probably going to be very grateful for any extra hands that can be lent, so don’t go in with the attitude that they’re going to reject you. It can be a very rewarding experience, especially if there is some kind of end goal, like saving a lighthouse. You will meet some very interesting people in the process too,” Quinn said.