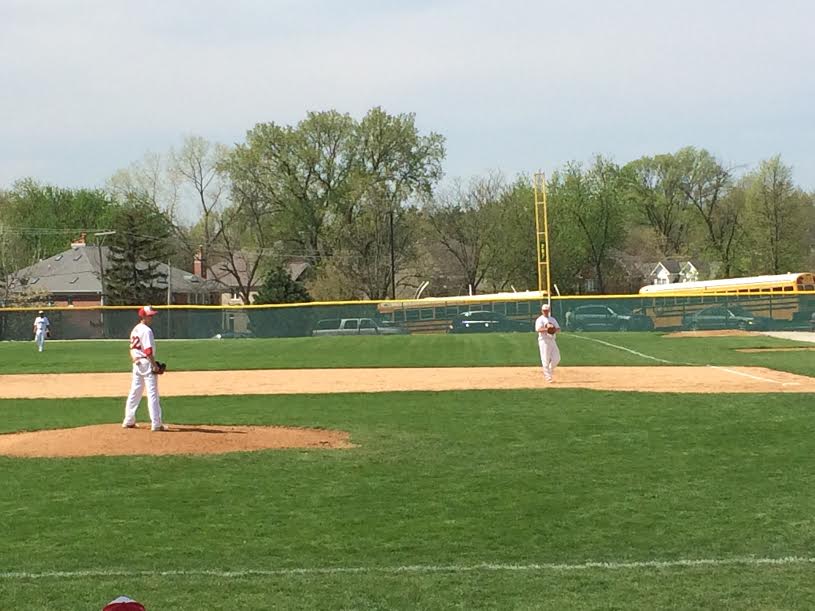 Members of the boys' baseball team are excited for the upcoming, spring season.

It was a tale of two games for the Hinsdale Central varsity baseball team on Saturday.
In the first contest of the doubleheader, the Devils’ bats struggled as they fell to Oak Park River Forest, 2-1.

Central’s lone run came in the first inning as they found themselves with the bases loaded and Mike Johnson up to bat. The junior drew a walk to force in their first and only run of the ball game.

Despite a promising first inning start, the Devils’ bats fell silent as they failed to put any more runs across the plate. A few hits here and there weren’t enough as they couldn’t string any together.

Central’s pitching was efficient, managing to keep the game close, despite lapses in offense.

Starting on the mound for Central in game one was senior Nick Senicka. Despite some control issues that sent quite a few pitches high in the zone, he battled through the first five innings without giving up a run.

In the first, it seemed as if the Huskies had started a two out rally, but junior right fielder Trenton Barnett put those thoughts to rest with a sliding catch to end the inning.

Later, Senicka put two runners on with no outs in the second inning, but the soon-to-be-freshman at University of Illinois Springfield  struck out two consecutive batters and forced a fly out to escape the jam.

OPRF finally broke through in the sixth inning when they knocked in an RBI, singled off Senicka and then tacked on another run off of junior relief pitcher Dan Teska.

Fortunately, Central has a short memory; after a 25 minute break, they bounced back to defeat the Huskies, 8-5, in game two of the double header.

This time, the Devils’ bats were firing on all cylinders as they racked up a total of eight runs. Three of those came courtesy of senior shortstop Ryan Haff, whose first inning double knocked in all base runners.

On the rubber was senior Charlie Banke, who pitched the win. Junior Dan Teska once again came in for relief, and senior Austin Butler closed out the game. 14-14 and 7-7 in conference play, Central will look to win the series on Monday when they take on the Huskies. Then on Thursday, the Devils host Addison Trail on senior night.