Hagermoser directs her own play 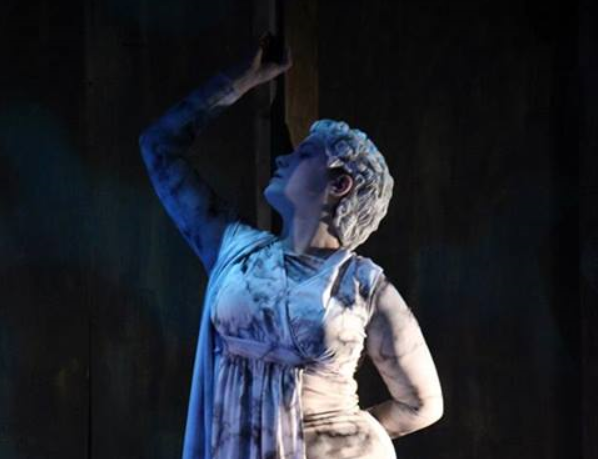 This summer, Ele Hagermoser, junior, is directing a play called Steel Magnolias by Robert Harling. They play is one of her favorite shows and is about the friendship among six women who regularly gather in a beauty shop. The show takes part in four scenes, with each scene moving slightly forward in time, showing how the lives of the characters progress.

“Between the marriage of Shelby, the trials of Truvy and her new assistant Annelle, the ever-constant repartee between Clairee and Ouiser, and a thick cloud of hairspray, it’s a show that will keep you laughing even through the tragic ending,” said Hagermoser.

Hagermoser was motivated to direct her own play because of her experience for the past two years at Central’s Drama Club. She has taken part in plays and performances both inside and outside of school including playing a caryatid in Beauty and the Beast, Rachel Brown in Inherit the Wind, Sister Pheobe in As It Is In Heaven, a Showgirl in Aida, Nelly in Rimers of Eldritch, Sandrine and Glory in Almost, Maine, and many other parts. She was also the assistant director for the Laramie Project: 10 Years Later.

With all of her experience on stage, Hagermoser hopes to pursue directing in college and professionally. The play this summer will be her first dive into directing, and she’s hoping that the experience will give her more insight into where she wants to focus in the future.

“I love theatre in every aspect, whether that is acting, technical, or even administrative, and directing and producing my own show allows me to have a part in all of those aspects in a way assistant directing does not,” Hagermoser said. “I just woke up one day and decided that I was going to start my own show, and I did, which still scares me more than I’d like to admit.”

Directing is where Hagermoser’s true passion lies. For Hagermoser, directing encompasses all of the things she loves most.

“As much as I love performing, I would prefer to help other actors or artists reach their full potential. Directing allows me to do that while still giving me a creative outlet, which is the best of both worlds,” Hagermoser said.

In preparing for the play, so far Hagermoser has mostly been doing administrative work. She had to find a theatre to perform in, pick a show, and work on casting. Each part of the whole process has come with its own challenges. The most recent challenge Hagermoser had to face was casting.

“I wish that I could cast everyone, but there are only six parts, and I have to make the decisions best for the show as a whole,” Hagermoser said.

In regards to Hagermoser’s directing style, she believes that the directing process is all collaborative and that the best shows happen when the artistic vision of the director and of the actors are all incorporated together.

“Personally, I want the audience to take away a greater message than just a few laughs at the old bats of this beauty salon,” Hagermoser said. “I’m just here to make sure all the characters mesh cohesively into a show that can both be enjoyable and moving to the audience and actors.”

Of the whole process, Hagermoser said that the hardest part was getting over the fear that she’s doing the play all by herself. She realizes that each day is going to pose a new set of problems to be solved, and she finds this both exhilarating and terrifying.

“I don’t have anyone to lean back on if times get tough, and on top of that I’m new to this,” Hagermoser said. “I’m sure that there are going to be lots of problems that I am just going to have to use my best judgment with and hope for the best.”

On the other side, the most enjoyable part of the whole process for Hagermoser is getting to work with all of the people who will be helping her with the play. Benita Ning, junior, is Hagermoser’s head of all technical aspects.

“When Ele asked me to help out, I was immediately so excited because stage tech isn’t a job to me; it’s fun,” Ning said.

Of the collaborative process with Ning, Hagermoser said, “I love hearing all of her ideas and bouncing ideas off of her. I think it’s an amazing opportunity to take on responsibilities that you will never have when supervised by an established program.”

Ning, along with other cast and crew members, will be helping Hagermoser as she prepares for her play. The show is by BE Productions, a theatre group that Hagermoser is starting which will be completely student run. The play will be at 7 p.m. on June 25 in the Mario Parente Theatre at the Oakbrook Terrace Park District.