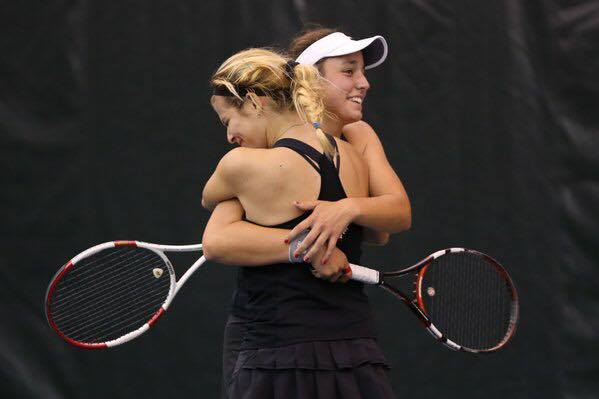 The girls’ tennis season ended on a high note as they took the team, the individual, as well as the doubles title in the state championship on Oct. 24. Senior Sandra Keta and Sophomore Stephanie Dolehide won the doubles title as the second doubles team, giving them the fifth seed in the tournament. Seeding determines the how difficult the matches will be in the beginning of the tournament.

“Sandra and I didn’t really think about seeding,” Dolehide said. “We went in wanting to win and not wanting to leave the tournament without a team win and our own doubles win.”

Coming into the tournament as a team that has won the state title three times, the team was more relaxed than anxious.

“I wasn’t less confident at all, instead it made it seem like we had nothing to lose and so I think we played better knowing that there wasn’t that much pressure,” Keta said.

The team was proud of their own determination; however, they attribute a lot of success to their coach, Scott Radeki.

Despite putting them at second doubles, they came out on top and won for the team.

In terms of preparation for their matches, they both use dynamic exercises and drink a lot of water for hydration. Taking one match at a time, they stayed determined and confident.

“We scream at each other because we are so happy and also high-five when we win a big point,” Keta said. “It was these small motivators that led us to the big win.”