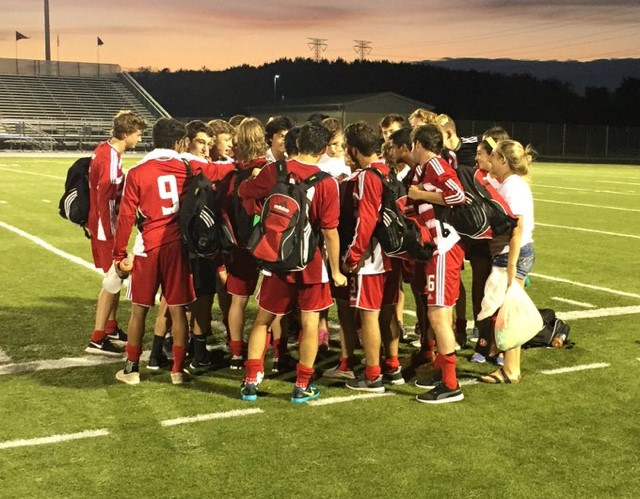 Boys Varsity Soccer huddles up before their game against Metea Valley on Aug. 25.

Coach Michael Wiggins was interested in analyzing the quick succession of the goals.

“Obviously we want to strike first and we did that at a favorable time in the game, just before the half. Unfortunately for us, Metea took advantage of the ideal time to strike back, and that was within [10 seconds] of being scored on,” Coach Wiggins said.

Coach Wiggins was still optimistic about the team’s ability to set the tone of the second half of the match.

“I was concerned about the energy and enthusiasm at the half. We didn’t look right. I felt like we played a bit more inspired, and really thought we were making a difference all over the field. I liked how we combined and connected. I am encouraged going into the weekend,” Coach Wiggins said.

After playing two regular season games, the Red Devils are still looking for the momentum they’ll need for a run into the post-season.The next game for the Red Devils is the continuation of the Red Devil Cup tournament on Sept. 1, at 6 p.m. at the home stadium against Downers Grove South. Their current record is 1-0-2.