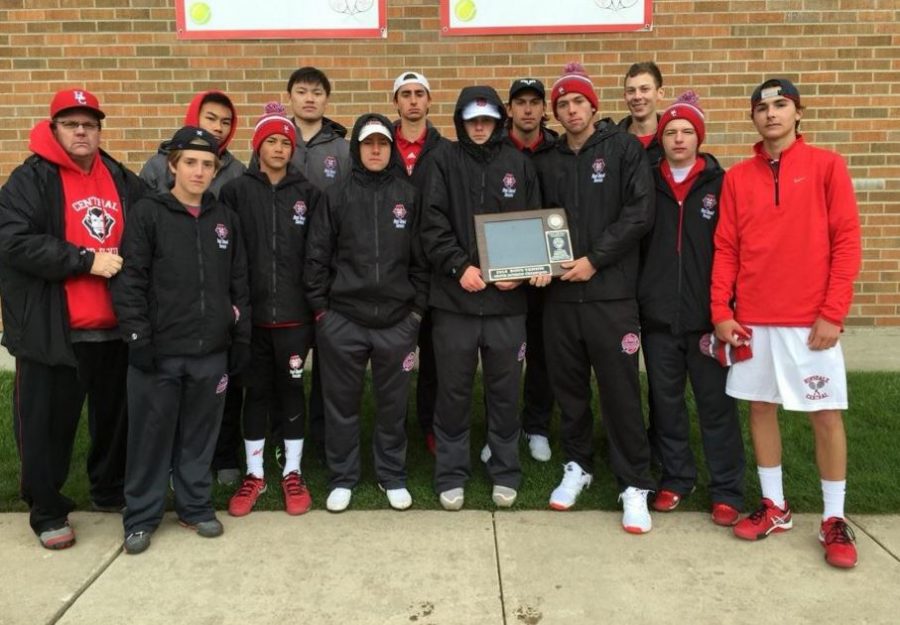 Last year's tennis team looks to win a state championship this year after coming in second place in 2016.

The varsity boys tennis team will kick off the season in Chattanooga, Tenn. on March 24 at the Deco Turf Team Championships. The team had their four-peat broken last season as they took runner-up to New Trier High School.

“[We have] the same goal as every year, we win the state championship, or we are a disappointment,” said Mr. Naisbitt, head coach.

In the past decade, the Red Devils have taken seven state championships.

“I learned freshmen year that nothing is handed to you and you have to go out and earn everything,” said John Singer, sophomore.

Varsity members recognized from early on that the road to the state title is not going to be an easy one.

This season will be the first year of the new two-class format at the state championships. The new format will narrow the playing field by splitting the small schools from the large; this makes the state tournament much more competitive as participants are stronger than usual. Central will play in Class A, the group consisting of larger schools.

The 2017 team is especially unique because of its youth. Underclassmen will make up at least half of the starting lineup.

“[The underclassmen] are going to make or break us; we have a lot of young talented players, kids who are coming up who have got to play and succeed for us to do well. So, they are going to be the difference,” Coach Naisbitt said.

On the other hand, there is no lack of confidence in the upperclassmen. This season, the captains will be the junior duo of Trevor Hamilton and Zack Elliott.

“They have experience at the state tournament, they are veterans of the program, and they are born leaders; it was an easy selection to have Zack and Trevor. They are also two of our best players,” Coach Naisbitt said.

“As captains, Zack Elliott and I, will have to keep all the guys together and lead by example in order to fulfill our desires at state,” Hamilton said.

As well as confidence in the upperclassmen leadership, the players have faith in their coaching staff.

“Mr. Naisbitt and Coach Scott Radecki have been around racking up championships for years and know what it takes,” Hamilton said.

“During the offseason, I trained for an hour in the morning and played from 2:30 p.m. to 5:30 p.m. Monday to Thursday at Naperville Tennis Club and played tournaments on the weekends. This was my first year training at Naperville, and it has been great so far, the coaches, such as Brian Page and Scott Radecki, push you every day to improve and grow your game,” Singer said.

As always, the bar is set high for the tennis team as they start the road to state.

“We have tradition, expectations, and motivation,” Coach Naisbitt said.