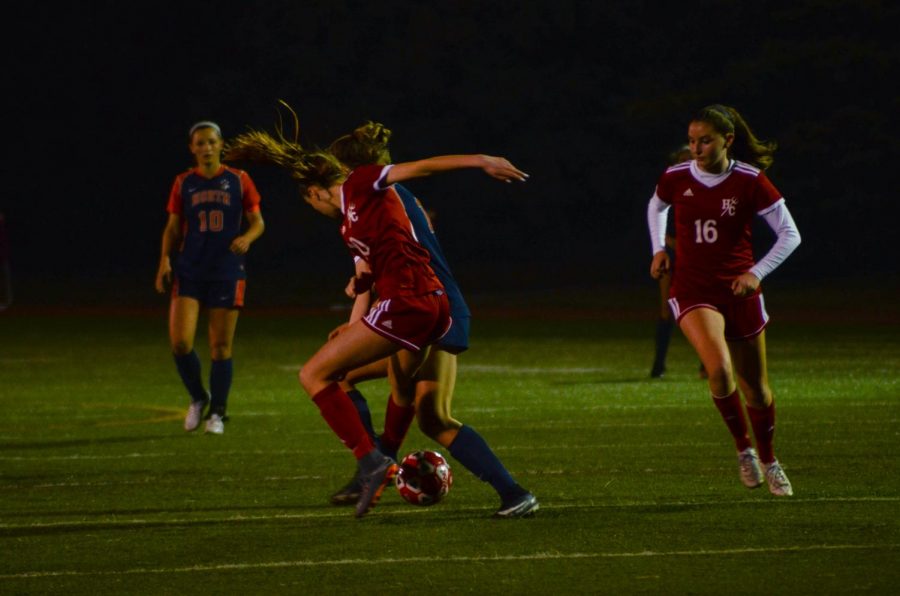 On Saturday, April 8, the girls varsity soccer team traveled to Evanston High School to play against Carmel High School for part of the North Shore Invite, a series of games played over the course of a week.

The Red Devils won the game in a final score of 1-0. Sammy Guido, junior, was the lone goal scorer.

“We didn’t know much about the team going into the game so we didn’t think they were predicted to win,” said Chloe Heiser, junior team member. “To stay motivated I just try to act like the game is a really important conference game, so we can keep the intensity high.”

The girls varsity team members have been working hard during games and early in the morning at Dickinson Field for practice to make sure they play the best they can.

“We all put in great effort to beat an undefeated team, from the offense getting a goal to the defense working hard and communicating well,” said Fiona Fitzsimons, sophomore team member. “One big goal we have is to beat Lyons Township and try to keep our winning streak.”

There are three main positions in soccer: defense, offense, and midfield. While there are more specific positions within these categories, those are the most basic forms.

“I play outside right midfielder, and I like this position because I dribble along the side line and cross the ball in front of the goal for my teammates, and I get to play a little offense and defense,” said Maddie Lynch, junior team member.

The next girls varsity soccer game is on Saturday, April 14 at Loyola Academy’s Wilmette campus versus Lake Forest at the final game of the North Shore Invite.