Boys lacrosse wins home game, advancing them on their journey to state 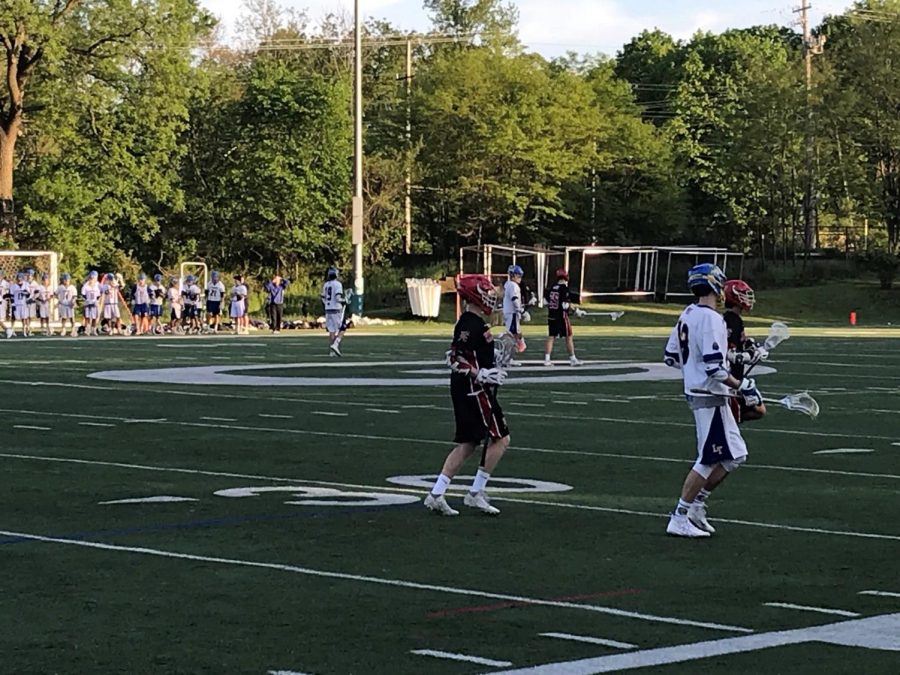 Boys lacrosse pulled off a win against Wheaton North at their home game on May 21.

The boys varsity lacrosse team matched up with Wheaton North on May 21 at Dickinson field, pulling ahead for a victory.

The two teams arrived at the field 30 minutes before the 5:00 p.m. game in order to warm up.

“Heading into the game we focused on having a positive and confident mindset,” said Grant Niestrom, a sophomore on the team.

Towards the end of warm ups, fans began to find their seats on the bleachers. Some of the varsity members of the girls lacrosse team made an appearance to show their support for the players and the club.

“I was so excited to finally come out to one of their games. I think it is really important that lacrosse players cheer each other because we are one collective sport,” said Jessica Joy, a sophomore on the girls varsity lacrosse team.

Owen Hare, a sophomore, started the game by winning the faceoff and passing it to Jack Crews, senior. Crews scored the first goal, putting the Red Devils at a one point lead.

With a score of 5-4, the first half came to an end and the boys huddled around Coach Mares for their usual pep talk.

“Our coach told us to keep on playing our brand of lacrosse. He brought up the fact that last year when we played this team, we destroyed them, and that really motivated us to start the second half stronger,” Niestrom said.

Matthew Rodgers, junior, made an appearance in the second half and switched with Hare to take the faceoff. Gavin Bailey, a freshman, also appeared in the second half by landing a yellow card after cross checking an opponent during transition.

The final shot ensued after Bailey’s release from the yellow card. Bailey scored at the end of the second half, finalizing the score as 13-9.

“When Gavin scored and the final buzzer went off, everyone was yelling, even the coaches. I think everyone was just super impressed with how the boys pushed the pace during the second half,” Joy said.

While fans exited the stadium after a successful night, the boys varsity team had already begun preparing for the long journey to the state championship.

The next scheduled game for the boys varsity team falls on May 26 against Glenbard West for sectional finals.