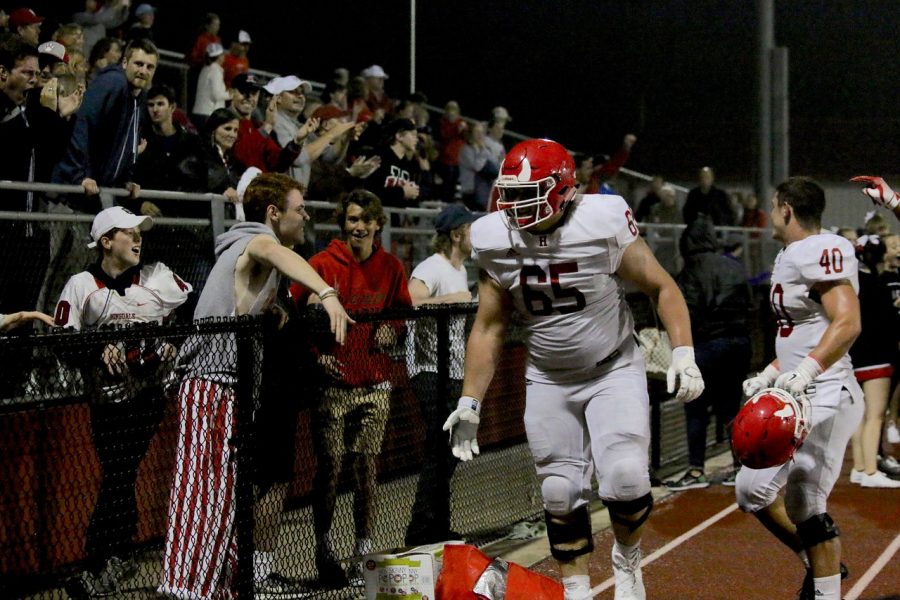 Senior lineman, Brendon Passarelli, celebrates the team's victory with other students at Naperville Central on Aug. 24.

The football team beat Naperville Central in a nailbiter on Friday, Aug. 25. The team went down 28-7 but came back to win 35-34 in the final few minutes in a stunning season opener.

A light mist encompassed the field as both teams joined together for the anthem and the Red Devils received the opening kick off.

The season’s first drive was everything the coaches could have asked for. Senior running back, Luke Skoka, was fed the ball the entire 80-yard drive which ended with him taking it to the house to get the Red Devils on the board first.

What seemed like an excellent start for the Red Devils resulted in giving up 28 unanswered points to Naperville Central.

The team had a chance to pull closer before halftime, as they received the ball with nearly two minutes left in the half after Naperville Central took a 21-7 lead. Senior quarterback Matt Rush led the offense to the red zone but senior kicker, Zach Dresher, missed a field goal with one second on the clock. Dresher would redeem himself later though.

Naperville Central received the second half kickoff and quickly scored a touchdown; just like that the Red Devils went down 28-7, but no one panicked.

Coach Hartman’s led team ran their offense unfazed as Skokna ran for his second and third touchdowns of the night to bring the Red Devils closer at 28-21.

Skokna racked up 178 rushing yards and three touchdowns through the middle of the third quarter, but that’s when he went down injured and senior running back Matt Bobak took over in the backfield.

The team’s defense stepped up after allowing a touchdown early in the third quarter as they kept Naperville Central quiet for the rest of the quarter.

Rush connected with Tommy Fitzsimmons, senior tight end, on a 36-yard pass to the end zone to bring the Red Devils level at 28-28.

“We knew we needed to score that drive to tie it up after our defense got two big stops,” Fitzsimmons said. “All I had to do was run after Rush threw a perfect ball behind [Naperville Central’s] defense.”

Naperville Central quickly responded with a long passing touchdown but failed to convert the extra point making the score 34-28.

On Naperville Central’s next drive, the team’s defense showed up and forced a big fourth down late in the final quarter. When the team needed a big play the most, senior linebacker Aidan Cruickshank stepped up for a blocked punt that led to the team’s first lead since the first quarter.

Naperville Central’s quarterback Payton Thorne continued his stellar performance driving his team downfield to put them in scoring territory. Down one point, yards away from the end zone, Throne fumbled while handing off to his running back and the Red Devil defense recovered putting the game away.

“The first game of our senior year was wild,” said Chris Freeman, senior. “I guess we shouldn’t have stormed the field when the team won, but it was crazy.”

The team’s opening win of the season came at a significant cost with Skokna suffering a major injury that may hold him out for the season.

“It felt like a playoff-type atmosphere at the game, it really did,” Coach Hartman said. “It’s just a special group of kids we’ve got.”

The Red Devils will travel to Willowbrook High School on Friday, Aug. 31 for their second game.