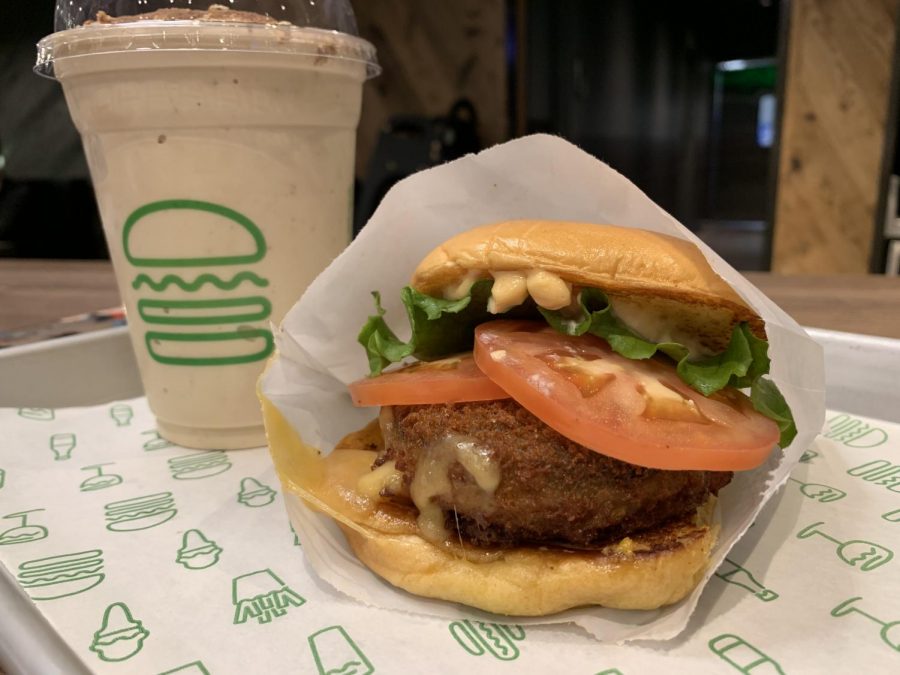 The Shroom burger consists of a crisp-fried portobello mushroom filled with melted muenster and cheddar cheeses, topped with lettuce, tomato, and ShackSauce.

Recently opened on Friday, November 30, 2018 in Oak Brook, Shake Shack raised a lot of excitement from students. The new opening marks the first west suburban location and the sixth Illinois location for Shake Shack. Other Illinois locations include three in Chicago and one in Skokie.

The new location being in the Oak Brook Center, a premier shopping, dining, and entertainment destination, makes it more feasible for students to go grab a bite after running errands or just shopping. To make the service and process even quicker and easier, a buzzing system is used.

“I’m not a big fan of most of the pricey restaurants in Oak Brook Center, but I usually go to Shake Shack after shopping because I know I can’t be disappointed,” said Lela Matthews, junior.

Additionally, the proximity of the new location is much more convenient in comparison to the closest Shake Shack prior to the new opening, which is located 35 minutes away in River North, Chicago.

“I used to have to take the train to go to the Shake Shack in the city, but I appreciate and really like how close the new location is,” said Ella Centracchio, junior.

Shake Shack offers a variety of options below the $10 price point. I ordered the Shackburger, which was served on a non-GMO Martin’s Potato Roll with lettuce, tomato, and a trademarked secret ShackSauce.  The quality of the burger was noticeably different and better than other fast-food hamburger chains. The burger consists of 100% all-natural Angus beef, with no hormones and no antibiotics.

I also ordered a side of plain french fries, which were pretty similar in comparison to other fast-food chain’s crinkle cut fries such as Portillo’s. However, Shack Shack also offers cheese fries, warning that they’re “highly addictive” on their menu.

“Shake Shack’s cheese fries are one of my favorites, and I can definitely notice a difference when it comes to comparing them to cheese fries from other fast food places,” said Naya Khayat, junior.

If you’re not a fan of burgers and fries though, Shack offers plenty other options, such as chicken sandwiches, hot dogs, and their iconic custard concretes and shakes. The Oak Brook location also offers additional frozen custard concretes: Pie Oh My, vanilla custard with a slice of Four & more. Five percent of sales from the Pie Oh My concrete treat goes to the Greater Chicago Food Depository.

The Oak Brook Shake Shack is located at 1950 Spring Road.