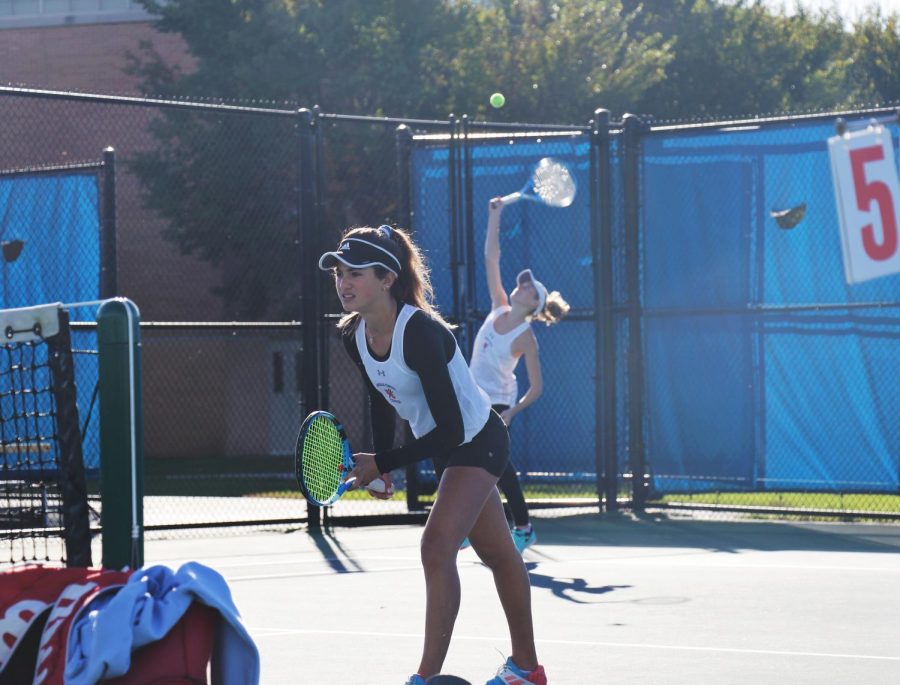 The girls’ varsity tennis team played against several schools on Friday, Oct. 18 at 1 p.m. and Saturday, Oct. 19 at 9 a.m. on LT’s home court. The team won both conference and sectionals.

The team typically practices Monday through Friday at Burns Field, because school courts are unplayable. They have Tuesday and Thursday matches and Saturday invitational weekly. The formats vary but usually they play three singles and four doubles matches.

“As a team, we won, but sadly my partner and I lost to our doubles team in the third set, but they played great while we didn’t play at our full potential, but overall everyone qualified so we’re pumped for that,” said Caroline Kotarski, senior captain.

The captains of the team include seniors Gabrielle Sullivan, Caroline Kotarski, Mia Dhillon, and Sarah Badawi. They practice even after the season is over. The team plays tennis all year and practices about two to three hours a day on private courts.

“We swept our conference dual meets and then won the conference tournament,” said Shawna Zsinko, varsity head coach. “We won Sectionals, we got everyone to the semis to qualify for State.”

Nicole Hu got first place. Prachi Shah got fourth place in singles; both are freshmen. Then seniors Sarah Badawi and Caroline Kotarski lost to sophomores Katie Dollens and Zoe Limparis in the finals.

“Normally tennis isn’t with a team, so I love the team aspect of high school tennis, it makes you feel like you are part of a community with other people like you,” Hu said. “Plus, you aren’t just playing for yourself, but also for your team.”

The team starts State on Thursday.

“This week leading up to state was just grinding it out and fixing some aspects of our game to play the best we can and hopefully win state,” Kotarski said.

In order to prepare the team practices every day after school, and are now trying to do their best to get ready both mentally and physically. It is easy for them because they all are very close and rally around each other well.

“I think we really came together,” Kotarski said. “Throughout all four of my years playing on the team we’ve never had a problem between the girls; we’ve always worked together and supported each other to do better.”