Starbucks drinks to get you in the holiday spirit 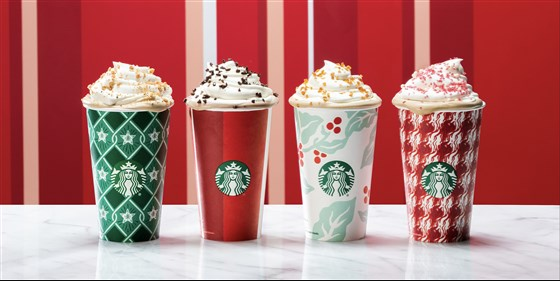 The drinks are famous because of their Christmas themed flavors.

Every year, many look forward to getting into the holiday spirit through seasonal menus, like that of Starbucks. In the past few years, Starbucks’ drinks and holiday cups gained a lot of attention, whether it’s because of the controversial cup designs or the actual drinks themselves. This year, Starbucks announced its holiday drinks on Nov. 7.

This season’s menu includes Peppermint Mocha, Toasted White Chocolate Mocha, Caramel Brulée Latte, Chestnut Praline Latte, and Eggnog Latte. All of these beverages are available iced, hot or as a frappuccino. Additionally, all of these drinks are returning from previous seasons.

The Toasted White Hot Chocolate is a popular drink that many people enjoy. The drink is topped off with candied cranberry sugar and whipped cream. I tried it and thought it wasn’t as good as everyone said it was. There was a bitter aftertaste and it was very sweet. I would give it a 5/10 because it was too sweet and it tasted like plastic.

The second drink I tried was the Peppermint Mocha, which I got as a hot drink. The mocha had no flavor and tasted like it was just water with some peppermint in it. I would give it a 6/10 because it was nice to drink in the cold but it had no flavor.

“I enjoy the Peppermint Mocha because it’s coffee with a fun holiday flavor that reminds me of Christmas time,” said Grace Clopton, junior.

Depending on the size, the drinks cost around $5.50 each. The smallest size for each drink is tall.

This year, Starbucks also announced a new line and design for their seasonal holiday cups. The cup is reusable and red that says “Merry Coffee” with alternating letters. Every time a customer brings the red cup in, they receive a 50-cent discount until January 6, 2020.

“I think the cups are really cute and I actually like mine, but it annoys me because the words aren’t coherent. I like the idea but they didn’t execute it right,” said Maia Groom, junior.

Starbucks also came up with a new line for their disposable cups. The designs are Christmas themed with red and green designs. They also have white polka dots that cover the cup with a green stripe on the back that gives a finishing touch like a ribbon.

The seasonal drinks are available until Jan. 6 before they announce their new lines for the next season. If you are looking for an enhanced experience at Starbucks, check out the largest Starbucks that recently opened in downtown Chicago.