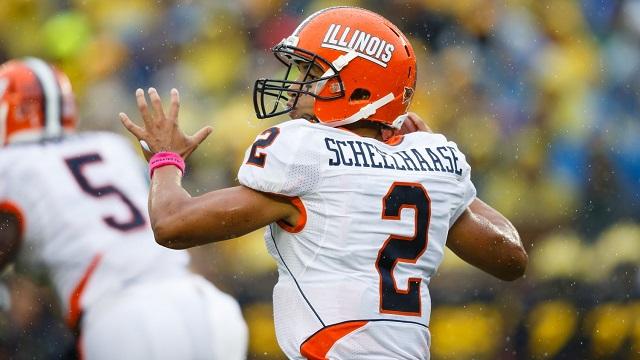 Nathan Scheelhaase has been a pleasant surprise for the Fighting Illini this season. After a great freshman year, Scheelhaase saw his numbers decline the next two years, but is now back on the national radar. So is his opponent: the Washington Huskies. They put a beating on the BCS busting Boise State Broncos in week one and had a bye last week. The Huskies will be well rested and led by QB Keith Price, who has a 87.7 QBR. What to watch: How Scheelhaase handles a Washington defense that held Boise State to zero touchdowns (first time in 15 years).

It is no longer than Dan Persa era. It is no longer the Mike Kafka era. The Wildcats are still a very potent offense, piling up 92 points in their first two games. Ranked 17th in the AP Poll, Northwestern will look to start the season off 3-0 for two years in a row. Considering they have already topped Cal and Syracuse, Western Michigan should pose no major threat. That said, the Broncos do have standout freshman wide receiver Corey Davis. The Wheaton, Ill. product already has 212 receiving yards and will be the key if Western Michigan wants to upset Northwestern at Ryan Field. What to watch: How will Venric Mark perform after sitting out against Syracuse?

The Fighting Irish are reeling after a loss to Michigan under the bright lights in Ann Arbor. They will look to regain their footing against a struggling Boilermakers’ team. Tommy Rees is filling in for an unenrolled Everett Golson. He has done quite well, throwing 660 yards through the first two games, although also throwing two interceptions against Michigan. After being annihilated by Cincinnati in week one, Purdue will look to somehow salvage another season that looks dimly lit. A start would be to upset the Fighting Irish. They were close to doing it last season. What to watch for: This is a trap game. See how the Irish can rebound after a heartbreaking loss.

Devin Gardner, honoring Jon Harmon by wearing No. 98, put together an impressive performance of 4 touchdowns and 294 passing yards against Notre Dame. The Wolverines are averaging 50 points a game this season and the Zips are 101st in the nation in points allowed. Expect the potent Michigan offense to tear apart a week Akron defense. The only hope for the Zips is for their quarterback duo of Kyle Pohl and Nick Hirschman to play the best game of their lives. What to watch: Brady Hoke, well actually Tim Horton’s, is giving out glazed donuts out to the first 5,000 students in attendance.

After a last second field goal downed the Hawkeyes in week one, Jake Rudock and co rebounded to beat Missouri State last week. Rudock has thrown only one TD this season, while throwing three interceptions. This is a rivalry game and would be a huge confidence for Iowa before heading into Big Ten play later in the year. Iowa State on the other hand, has had two weeks to think about the week one loss to Northern Iowa, a FCS team. The Cyclones are certainly using that loss as motivation in preparation for this rivalry game. What to watch: Can the Cyclones recover to get a much needed win?