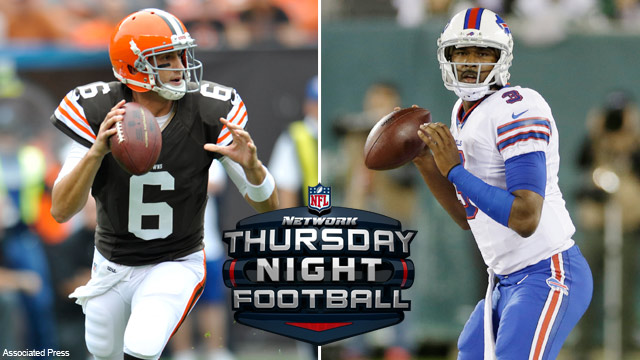 A few weeks ago, this Thursday Night “Primetime” game looked like a snore-fest. Buffalo was playing with a shell of its former team and an inexperienced QB in EJ Manuel. Cleveland seemed to be positioning itself to tank the season for a top draft pick, an idea further perpetuated with the trading of 2012 3rd overall pick RB Trent Richardson and the benching of 2012 22nd overall pick QB Brandon Weeden.

The Bills are coming off an extremely impressive defensive showing against the defending Super Bowl champion Baltimore Ravens. They picked off 120 million dollar QB Joe Flacco five times in the contest, backstopping a 23-20 Buffalo win. Cleveland, on the other hand, has been playing like a team possessed. Two straight convincing wins against 2012 playoff teams, including a 17-6 defensive thrashing of the division rival Cincinnati Bengals. Both teams are coming into the Thursday night game hot. It should be a tough one.

Green Bay will host the game with easily the most playoff implications on Sunday. The Packers are coming off their week 4 “bye” with a desperate need for a win. They were dismantled by the Cincinnati Bengals in week 3, a game in which Packers QB Aaron Rodgers threw multiple interceptions in a single game for the first time since 2010.

They will need to fight past the red-hot Detroit Lions to get the “W,” however. Detroit is currently holding the lead of the NFC North after a beat down at home against the Chicago Bears. They will take play this week 5 game like it is the Super Bowl. The Lions have not won in Green Bay since 1991. Everything is on the line for both teams.

Both teams were offseason Super Bowl favorites. Now, both teams are 2-2 and competing for 3rd place in their respective divisions. Neither team can afford another loss this early in the season, especially with other rival teams pulling ahead in the standings.

In week 4, both the Texans and the 49ers saw a glimmer of hope. The Texans took a vicious Seattle Seahawks team into overtime before but collapsed offensively, resulting in a loss. The ‘9ers blew out the rival St. Louis Rams on Thursday night football. It will be a tough game of defensive ground-and-pound football Sunday night. Texans RB Arian Foster and 49ers RB Frank Gore have started out the season well enough, but will look to tear up some weakened secondaries in the primetime contest.

The storyline of the season: the New Orleans Saints post-bounty-catastrophe redemption tour. Next stop, Chicago.

Saints QB Drew Brees has been nothing short of incredible through the first 4 weeks of football. So far, he has slung the ball for 1,434 yards and 10 touchdown passes with only 4 interceptions on the Saints’ way to an undefeated 4-0 record. After dispatching a previously undefeated Miami Dolphins team handily on Monday night, the Saints will look to keep the dream alive.

The Chicago Bears, on the other hand, came down from their euphoric new-coach high as they were humiliated on Sunday against the Detroit Lions. QB Jay Cutler was playing MVP caliber football before the game, but threw 3 early interceptions in the contest to give the game away. The defense had no answer for Lions RB Reggie Bush and couldn’t get off the field on third down. If the team can get back on track, they could certainly challenge the undefeated Saints, but if they play the way they did last Sunday, expect a blowout. But don’t worry Chicago fans, Coach Marc Trestman won’t let that happen.