Boys’ gymnastics off to strong start 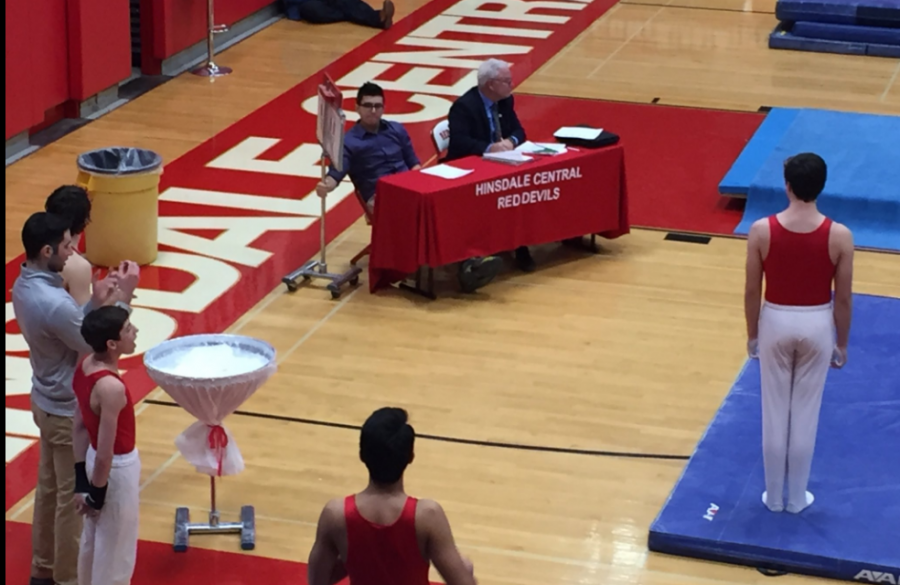 Hinsdale Central gymnasts performs in front of a few judges.

The Boys’ Gymnastics team is off to a strong start to the season with top ten finishes in all their meets, coming in first at the Red Devil Invite at home on March 3 and placing second in the Lyons Township Invitational on March 10 at Lyons Township.

The team is executing despite being without one of their strongest members, Ryan Leahy, senior. Leahy hurt his anterior cruciate ligament, widely considered to be one of the worst injuries in the sports world.

“Varsity this season has done an outstanding job that is simply stunning. With a valuable member gone early in the season with an ACL injury, the team hasn’t slown down one bit,” said Armani Kongmanivong, senior. “In fact, it is to my belief that the team has been more fired up and ready [than] any team I have competed on.”

Central hosted York High School on Tueday, March 14, which they won by 6 points.

“We felt good about the meet but we still feel like we can improve,” said Tomas Baliutavicius, junior.

Along with hosting York, Central hosted the Kupicka Invite on Friday, March 17, in which they came in third place with 146.450.

“Last friday was the Kupicka Invite named after one of the old coaches who won many conferences, sectionals, and state titles,” said Alex Roca, junior. “We did well, especially Nolan Holmes.”

Central has most of their meets after spring break, hoping to continue their strong smart. Their next meets are Tuesday, April 4, hosting Downers Grove North, and will host the Canino Invite on Friday, April 7.