Class of 2017 shares their senior quotes 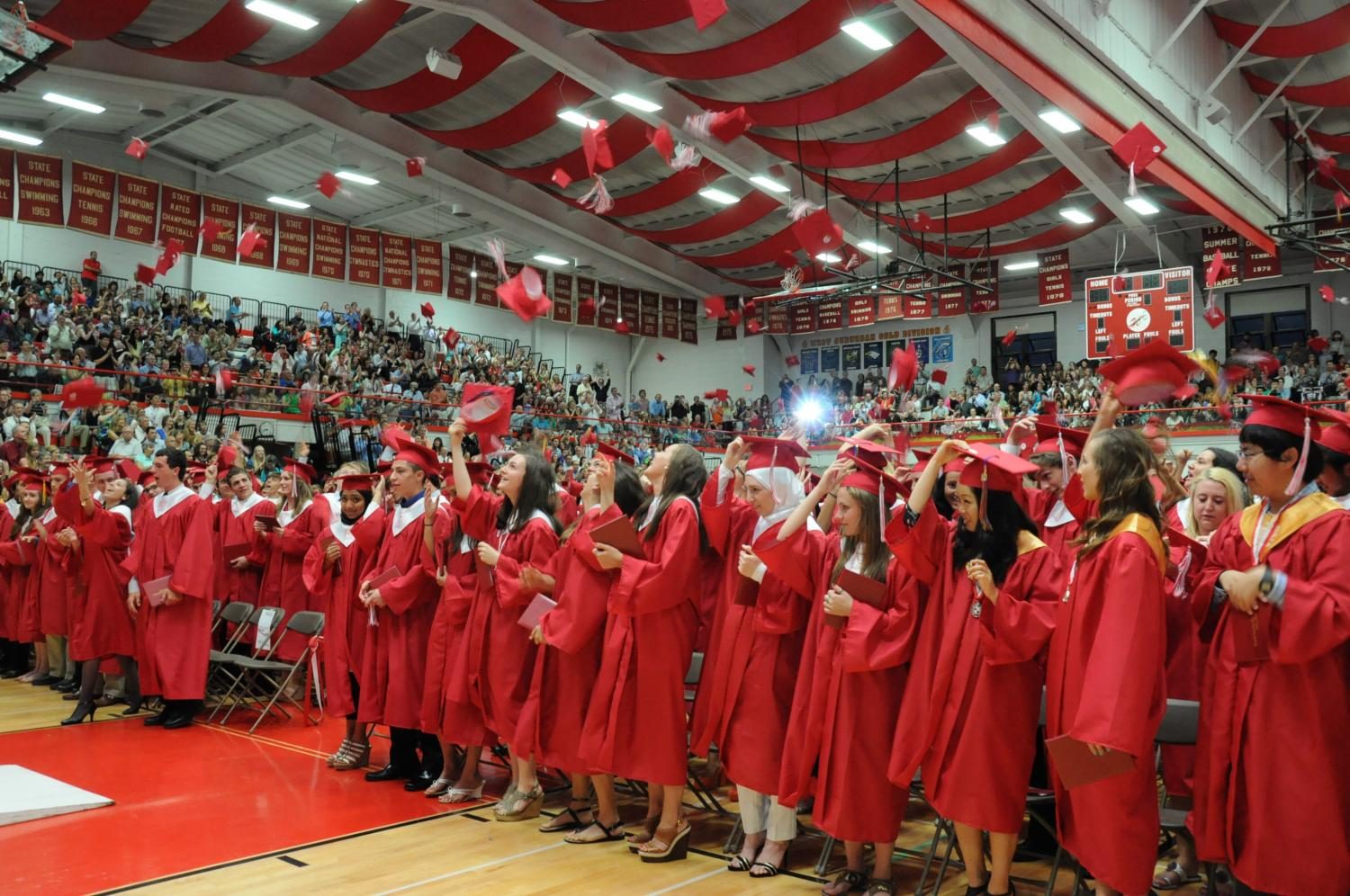 Before graduation on May 25, some seniors chose to leave behind a few parting words.

With graduation only a week away, a few members of the class of 2017 decided to leave their mark at Central through the time-honored tradition of senior quotes. Whether you submitted something that’s inspirational, funny, or just plain random, we’ll miss you, seniors. Enjoy whatever is to come!

Abbi Shaker: “Saddle up.” -Self

Alex Ritz: “To use a shield you must bring a shield.” -Self

Alicia Tracey: “Sick days were always the best because I would just sit at home all day and watch the Maury Show.” -Self

Alison Albelda: “Sometimes you gotta work a little, so you can ball a lot.” -Tom Haverford

Allison Tracey: “There is absolutely no excuse for laziness, but if you find one, let me know!” -Unknown

Alyson Chatterjee: “You shouldn’t go through life with a catcher’s mitt on both hands; you need to be able to throw something back.” -Maya Angelou

Amy Betman: “This wasn’t like High School Musical at all.” -Self

Anand Korrapati: “BMW drivers are so inconsiderate to other drivers.” -Self

Anna Lowery: “Most people are nice when you finally see them.” -Harper Lee, To Kill A Mockingbird

Armani Kongmanivong: “…wash the brush, just beats the devil out of it.” -Bob Ross

Becca Derezinski: “Join as many clubs and sports as possible, high school is more fun if you’re involved.” -Dan Jones

Bernard Wong: “In the end, we only regret the chances we didn’t take, the relationships we were afraid to have, and the decisions we waited too long to make.” – Lewis Carroll

Bradley Frederick: “This human heart, is too much even for the machines.” -Maylis De Kerangal

Brian McCarty: “McCarbCap, out.” -Self

Caitlyn Elazegui: “We survived but we’re dead.” -Dash, The Incredibles

Camille Kim: “I’m sorry mom I tried real hard I only got a B average.” -Self

Caroline Langan: “So can I have an iced Carmel macchiato with extra extra caramel?” -Self

Charlie Gelman: “Why aren’t I 50 points ahead?!” -Hillary Clinton

Chris Stella: “The tree of liberty must be refreshed from time to time with the blood of patriots and tyrants.” -Thomas Jefferson

Christie Downey: “I curl my hair everyday.” -Self

Claire Brennan: “I stopped caring a long time ago.” -The Office

Claire Brixie: “Don’t let fear or insecurity stop you from trying new things. believe in yourself. Do what you love. And most importantly, be kind to others even if you don’t like them.” -Stacy London

Colin Jay: “Yesterday is history, tomorrow is a mystery, but today is a gift. That’s why it is called the present.” -Master Oogway

Declan Casey: “If only closed minds came with closed mouths.” -Self

Emerson Wilson: “Take a breath and realize, life can be wonderful.” -Self

Emma Lindsey: “Use the surge of fear and adrenaline to sharpen your decision making.” -Dwight Schrute

Emmett Grundberg: “Cat on a tin roof, dogs in a pile, nothing left to do but smile smile smile!” -Robert Hunter, Jerry Garcia

Eric Chang: “You stay grinding, I stay sleeping.” -Self

Eric Johnson: “If there is a god, he’s a music god.” -James Horan

Evan Perry: “Life is full of ingredients, if you wrap it with right tortilla, success is inevitable.” -Unknown

Hadi Shiraz: “Yeah, anyone to invest in Apple is an idiot, especially Berkshire Hathaway, those guys don’t know what they’re doing.” -John Kloss

Haily Baran: “NEVER shall you do that EVER again.” -Self

Hamzah Choudhry: “How stupid are you?” -Squidward- “It varies.” -Patrick Star

Harrison Helm: “…everyone considers himself to be a priori quite free, even in his individual actions, and imagines he can at any moment enter upon a different way of life, which is equivalent to saying that he can become a different person. But a posteriori through experience, he finds to his astonishment that he is not free, but liable to necessity; that nothing withstanding all his resolutions and reflections he does not change his conduct, and that from the beginning to the end of his life he must bear the same character that he has taken upon himself.” -Schopenhauer

Holly Swasko: “I came, I saw, I contoured. That was the highlight.” -Self

Jacob Pines: “Sometimes you see a deer and you’re like oh cool a deer.” -Marquette King

Jake Youngman: “Everybody is a genius. But if you judge a fish by it’s ability to climb a tree, it will live its whole life believing that it is stupid.” -Albert Einstein

Jan Erik Naess: “You won’t be janning after you’ve come orienteering with me ;).” -Self

Jane Kealy: “What she order, it for later.” -Jill Schlais

Jason Huang: “If somebody ever asks you to do something, do it really bad so you never have to do it again.” -Unknown

Jeremy Miller: “It is not the critic who counts; not the man who points out how the strong man stumbles, or where the doer of deeds could have done them better. The credit belongs to the man who is actually in the arena, whose face is marred by dust and sweat and blood; who strives valiantly; who errs, who comes short again and again, because there is no effort without error and shortcoming; but who does actually strive to do the deeds; who knows great enthusiasms, the great devotions; who spends himself in a worthy cause; who at the best knows in the end the triumph of high achievement, and who at the worst, if he fails, at least fails while daring greatly, so that his place shall never be with those cold and timid souls who neither know victory nor defeat.” -Theodore Roosevelt

Jillian Schlais: “Oops, that didn’t go as planned.” -Self

Joseph Miscimarra: “Do or do not. There is no try.” -Yoda

Julia Fryzel: “Don’t cry because it is over. Smile because it happened.” -Dr. Seuss

Katie Hoffman: “Our fate lies within us, you only have to be brave enough to see it.” -Brave

Kirollos Bakheet: “Coming out of this school was tougher then coming out the closet.” -Self

Kristin Pocius: “Don’t cry because its over. Smile because it happened.” -Dr. Seuss

Laura Diggs: “Goodbye everyone, I’ll remember you all in therapy.” -Sheldon J. Plankton

Laurette McNabb: “If that was you on the phone and you on the bus, then who was flickering the lights?” -Squidward

Lourdes Gomez: “When someone asks you to do something, do it wrong so they don’t ask you to do it again.” -Paris Hilton

Magdalene Halikias: “She woke up every morning with the option of being anyone she wished, how beautiful it was that she always chose herself.” -Tyler Kent White

Marcus Bello: “I don’t have a quote, but I have a SoundCloud link, SoundCloud.com/realdrettimusic.” -Self

Marshall Moller: “The mitochondria is the powerhouse of the cell. That’s all I got.” -Self

Martin Berg: “Nobody is equal to anybody. Even the same man is not equal to himself on different days.” -Thomas Sowell

Matt Bruni: “We’re here for a good time not a long time.” -Self

Matt Wingren: “You can’t solve crime with another crime.” -Self

Megan Guenther: “Can I be excused for the rest of my life?” -Spongebob Squarepants

Meghan O’Reilly: “Debbie just hit the wall, she never had it all.” -Bowling For Soup

Mia Lee: “Look at the stars, look how they shine for you.” -Coldplay

Michael Elder: “Did you ever hear the tragedy of Darth Plagueis The Wise?” -The Senate

Michael Yaeger: “We can’t help everyone, but everyone can help someone.” -Ronald Reagan

Nick Lynch: “Lanky is not a word, neither is smarter.” -Self

Nika Byrne: “My parents think there is something wrong with me because I fall up and down the stairs 50 times a day.” -Self

Olivia Cirignani: “My rap name is Lil Hungry.”  -Self

Omorewo Oshe: “So much later that the old narrator got tired of waiting and they had to hire a new one.” -Spongebob’s Narrator

Parker Dow: “The aggression will not stand, man.” -The Dude

Riley Burr: “You can’t make everyone in life happy, you are not queso.” -Haley Burr

Riley Kowalski: “Never settle for a bad grilled cheese.” -Self

Sarah Bailey: “Yes, you can touch my hair.” -Self

Tim Laskowski: “Helen Keller was a hoax.” -Self

Travis Pelton: “It’s not done until it’s overdone.” -Self

Ugochi Ihemeson: “I spent way more time on Snapchat than I did writing essays….” -Self

Zach Wols: ¨I don’t know how I’m going to stay in shape without the Pacer test.¨ -Self

Zeljko Kospic: “Life moves pretty fast. If you don’t stop and look around once in a while, you could miss it.” -Ferris Bueller