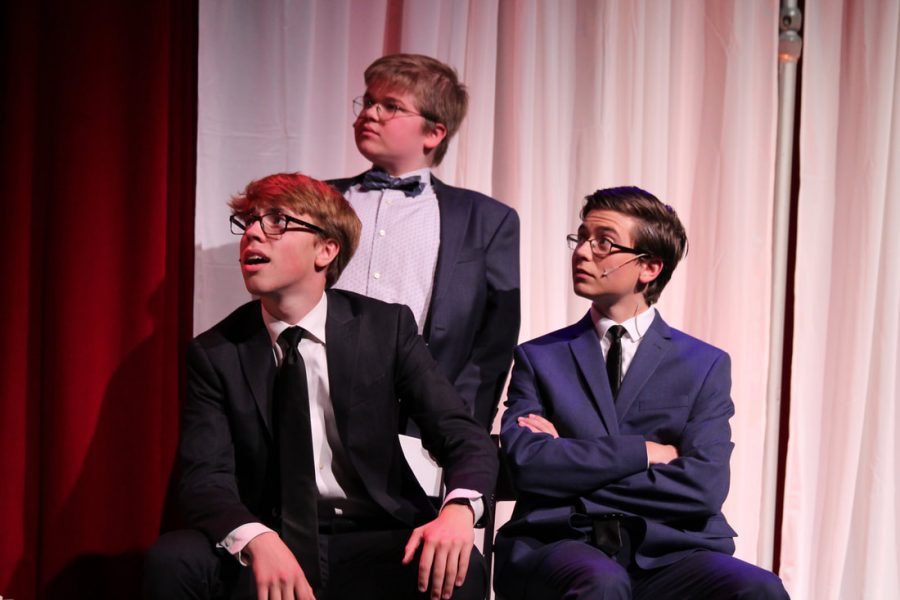 Alex Martin, far left, is seen acting in “Save the Date”, this year’s September show. He will be playing Lord Pinkleton this year in “Cinderella”.

AM: I’ve been acting for a while now. I think since first grade because I began taking acting classes in first grade, but then my first show was in second grade.

AM: I auditioned because I like coming back and seeing all the people in the program, taking part in all the traditions, and putting on an amazing show.

AM: This year’s auditions were different because the songs we had to prepare for the audition were provided, compared to past years where we would have to find an accompanist and pick our own song from all the songs in the world.

AM: To prepare for my song at the audition, I made a playlist that was only my song that I was going to perform for the audition, and then literally every time I got in the car or listened to music I just listened to that playlist and song on repeat so that I could get it stuck in my head. For callbacks, I did the same thing, but instead I tried to listen to all the songs that Prince Topher was in because ultimately one of the better ways to prepare for these auditions is to know the material for the show.

AM: It’s a nice way to close out the year. I want to have fun with this performance since it’s my last show because in the past, it’s been a lot of stress and very hard work. Of course, I still plan on working really hard while preparing for “Cinderella”, but I also want to focus on just having fun.

AM: I’ve done nine shows at Central, I think, so far. But outside of Central, I’ve been doing shows a lot since second grade, and I’ve been taking acting classes for 12 years. I did a program at Northwestern over the summer for on-camera acting. Other than that, I do shows at BAM Theatre and Theatre of Western Springs.

AM: Well, I could say the cool shows or professional things that I have done throughout my acting career, but I just really loved being in the school’s musical my freshman year. The musical that year was “Fiddler on the Roof”, and I loved it because I think it just really set me up and showed me that acting was something that I wanted to pursue and was something that I would want to possibly double major with when I go to college. The foundation of my high school acting career really all sprung from my freshman play and the musical because I looked up to the seniors then, and I just wanted to follow in their footsteps and make my own mark to help make this a great theatre department.

AM: I’ve seen “Hamilton” three times. It’s really embarrassing, but I love it.

AM: I definitely identify with Olaf or Kristoff from “Frozen”.