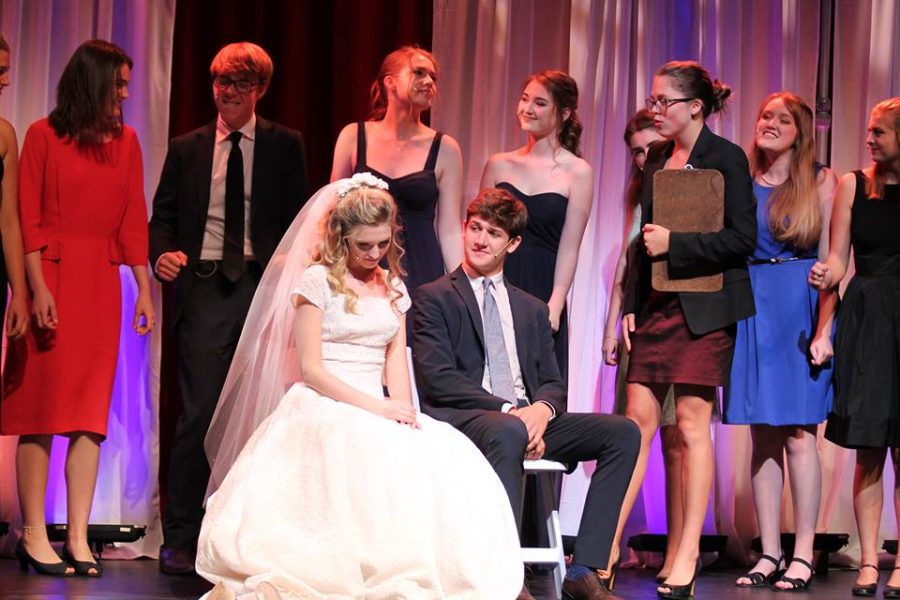 In addition to acting in this year’s September Show, junior Tim Moser, seated right, will be acting as Jean-Michel in “Cinderella”.

Tim Moser: This show I am Jean-Michel. I don’t know much about this character quite yet because [Rodger and Hammerstein’s] “Cinderella” is a newer and different version, so my character was written into the show. I think I’m supposed to fall in love with a stepsister, but I don’t know anything for sure yet about my character.

TM: I want to say I’ve been acting since about sixth grade. I’ve always just done school shows, and I’ve never really done much acting outside of school.

TM: I’ve just been doing acting for so long, and I love it. It’s a good group of people, and it’s always a fun time getting up on stage and performing.

TM: This year, they changed auditions. In the past, you would have to come up with your own monologue and song and find your own accompanist and do all this extra preparation for it. This year was different though because they gave us options. We had an option of four monologues that we could choose from and perform at the audition, and then they gave four songs for us to choose from, and they all varied. Personally, I thought this year’s auditions were easier because there was less independent work we had to do for it. To be honest though, I’ve never had to choose my song or anything because my voice teacher usually picks it for me.

DA: How did you prepare for the auditions?

TM: Well, my voice teacher helped me out a lot, but also auditions for me weren’t that bad because one of the songs that we could perform in the audition I had actually sung last year for a concert, so I didn’t have to do a ton of work on it. For the monologue, I just practiced and read through it by myself.

TM: I usually don’t get nervous for performances because being on stage just feels natural to me, and “Cinderella” isn’t any different. I’m really looking forward to this show though, and it’s the biggest role I’ve ever had in a musical.

TM: I’ve been doing the musical since freshman year, and I’ve done the September show, which we have to practice over summer for, and I’ve done the freshman show. Normally I don’t have time for fall shows though because I’m on the Forensics team too, which starts up in the fall. Forensics is mid-season right now too, so balancing the two is a little difficult.

TM: Last year’s musical “The Little Mermaid” was probably my favorite because we had a really fun senior class, and I was friends with a lot of them, so doing the show with all of them was so much fun and a really great experience. The show itself wasn’t the reason I loved it; it was more the people who were a part of it.

TM: I’m actually not that much of a theatre-person, but I recently saw “Hamilton” for the first time, and that was really fun.

TM:  I’m kind of weird in that I listen to all types of music. So far today, I’ve listened to a mixture of rap, country, and soft rock.

TM: If it has to be Disney, then I’d probably say Aladdin. I’ve played him before, so I know that he’s very adventurous and free-loving like me.